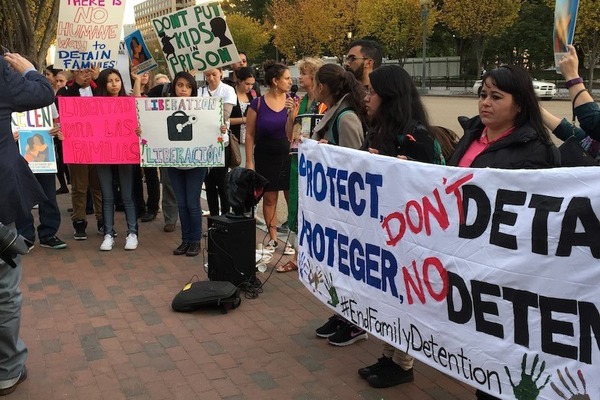 In August 2015, Judge Dolly Gee ruled that the Obama Administration’s policy of detaining migrant families had violated the terms of the 1997 Flores Settlement Agreement. The Flores Settlement ensured protection for all children in immigration detention, including those held with a parent.

The majority of the families held in detention are young children and their mothers who have fled extreme violence and persecution in Central America. Nearly 90% of these vulnerable families demonstrate credible fear and may be eligible for asylum. Still, six months after Judge Gee called for the release of children and their mothers held in these prison-like detention centers, all three family detention facilities remain open and in operation.

Detention Centers Are Fighting the Order

In attempts to evade the order, all three detention facilities are waging battles seeking child welfare licensing. The Texas Department of Family and Protective Services received over 5,000 pages of public letters, emails, comments, and testimony overwhelmingly opposing this licensure. On February 12, the department ruled to allow the centers in Dilley and Karnes to apply for licenses.

At the same time, the Pennsylvania Department of Human Services refused to renew the license for Berks Family Detention Center due to evidence of human rights abuses. Instead of releasing the mothers and children held in this facility after the license expired on February 21, the county has appealed the state’s revocation of the license. Mothers and children, some of whom have been detained for up to six months, remain detained at the facility.

How to Help Central American Families

Lutheran Immigration and Refugee Service (LIRS) firmly believes there is no humane way to detain children and their mothers. We ask for your help as we continue to call on the Administration and our legislators to end the practice of family detention:

Families that have fled horrific violence in search of refuge should not be welcomed with inhumane incarceration. We are a nation that stands for freedom, we come from a faith that stands for love and compassion, and we stand for welcome for all God’s children.