Imagine hugging your grandmother for the first time, or a brother you’d never met, or your mother whom you haven’t seen in ten years since you were a toddler.

“ABRAZOS,” a new film produced and directed by Luis Argueta, tells the story of fourteen children from the small southwestern Minnesota town of Worthington who travel to Guatemala to meet family members for the first time. The children are all U.S. citizens and so are free to travel, but their parents are not because they are Guatemalan immigrants without authorization.

My colleague, Jessica Jones, and I had the opportunity attend a screening and to meet Mr. Argueta along with two of the young girls featured in the film. Earlier in the day, Jessica had accompanied them to meet with Senators Al Franken and Amy Klobuchar of Minnesota.

The Rev. David Vasquez, President of Pacific School of Religion, first alerted me to this film. Pastor Vasquez is a strong advocate for the work of LIRS and has partnered with us previously. My curiosity was piqued because this film is about “my people” – I grew up just 30 miles from Worthington and nearly all of my extended family still lives there. Plus I felt especially close to the issues after numerous trips to Central America.

The movie is beautiful, moving, emotional, joyful, and tragic. While watching it, I was deeply impacted by the raw emotions of joy and sadness uncovered in the lives of all participants. In his review of the film, Pastor Vasquez said “what comes across is a compelling picture of the human spirit without sugar coating the heartbreaking reality of global inequality.”

I was also impressed by the role of faith and the church. All of my life has been centered around church so once again, I felt engaged because these were “my people.”

Lisa Kremer, Project Coordinator for Minnesota-based non-profit Familia Juntas, understood the issues facing these families, who were all part of the same Catholic parish in SW Minnesota. The initial trip was her brainchild and helping these reunions take place was a key part of her ministry in that congregation. In the discussion following the film screening, Lisa was asked why the families had been willing to take the risk to allow their story to be told, especially when they may have precarious immigration status. She replied simply, “their whole lives have been a risk.” From the dangers of poverty and violence in Guatemala, to the terror-filled journey to escape, to the on-going threat of being jailed and deported, risk is part of their daily lives. 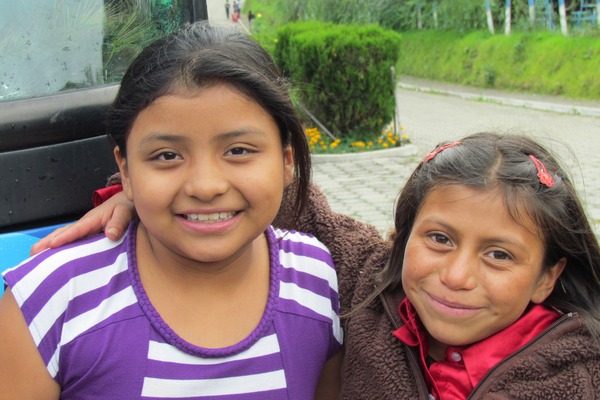 While watching these heartrending scenes of grandparents hugging their grandchildren, I was thankful that their story had been told. We at LIRS work on the national level to advocate for immigration reform and to stand for welcome, but we can sometimes miss the tangible human impact of our mission. Refugees and especially undocumented people in this country often live in the shadows and are voiceless. This film gives voice to their plight and puts human faces on some of the issues that we work diligently to address.

One of the young girls spoke after the screening on her determination to help many more people experience the hugs she received. “I always felt so sad that I never had received a grandparent’s hug at my birth or growing up. Now I hope I can help others receive hugs.” Not only does our work help give voice, we are also helping to shape the next generations of Americans.

Watch the ABRAZOS trailer and find a bilingual study guide available to assist groups in discussing the film.