After 36 Years Without Legal Status, a New American Shares His Story 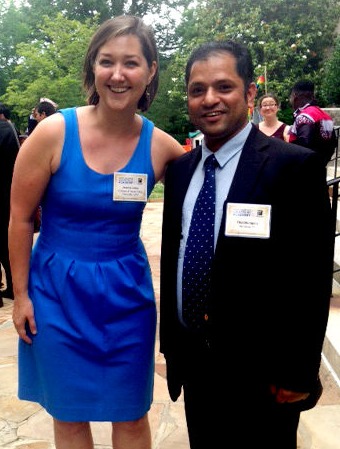 Every 4th of July, we are reminded that we are a nation of immigrants bound by fidelity to a set of ideals – democracy, freedom, liberty and the pursuit of happiness. So we are delighted that Tika Ram Dhungana, a former refugee from Bhutan is willing to share his new American story.

Tika currently lives in Pennsylvania with his wife, two little daughters, and parents. He recognizes the importance of citizenship in the United States after he spent thirty six years without any legal status. We are reminded of thousands of undocumented immigrants across the country who are currently living in fear of deportation and are separated from their families.

In today’s blog post, Tika shares his courageous journey and his hopes for immigration reform.

My parents were citizens of Bhutan, so I was a citizen by birth. Suddenly, the government of Bhutan adopted a policy of removing all southern Bhutanese who speak Nepali and follow a different culture. Most of our people were uneducated, illiterate, and couldn’t resist the ethnic cleansing policy. They were scared of torture (as many leaders were tortured and killed) and persecution which drove them to flee the country. My parents rented a cart to carry some of their basic belongings and we left the country at night, but I could see their eyes repeatedly staring back towards their motherland, especially their hard earned farm and house.

I had never imagined the refugee camps until I reached a crowded area with small plastic fences and plastic roof huts. My parents received plastic materials to build our temporary house. Initially, I cried for several days and nights and my parents comforted me stating that it was temporary, but we spent almost eighteen years in the refugee camp in Nepal.

Although it was a tough life, I had an opportunity to go back to school in the refugee camp up to tenth grade. My parents worked as laborers in the neighboring village and my brother taught in a private school, which sponsored my higher education. I received my masters degree in chemistry in 2007, and our resettlement process started that year. I was resettled in the United States in 2010 with my parents and was married in 2011. Since I was the only one working in my family, my dream of going for a PhD collapsed. I tried to take some other courses, but I couldn’t because of the greater responsibilities of taking care of my elderly parents and my kids.

Initially, I was distressed for not getting a well-paying job and not getting a chance to complete my education, but slowly I started comparing myself to less fortunate people who are struggling to live. I started looking around and writing about my experiences, which later turned into a book, Satisfaction and Service: A Grand Source of Success. The land of opportunity, as we used to hear, had really became my reality when I was interviewed by Good Day PA in Harrisburg, PA. I am now living full of satisfaction with my elderly parents, my wife, and my two little daughters.

My family’s integration into life in the US was possible because of resettlement organizations like Lutheran Immigration and Refugee Service. They walk with many refugee and immigrant families as they create new lives in this country.

LIRS has become an integral part of the resettlement process, and more than that, they are the leading organization advocating for the refugees and immigrants. The 2015 Migrant and Refugee Leadership Academy strengthened my advocacy efforts. There are many refugees and migrants who are dying due to an epidemic of curable diseases or due to war. They are our brothers and sisters; they are human beings like us. They may be a great resources for this country if they are also given better opportunities like us. I believe that “service to all beings is service to God,” and appreciate LIRS for providing such a great leadership training which is a milestone for advocacy.

The United States accepts more refugees and immigrants than any other country in the world, welcoming individuals regardless of their religion or ethnicity. This is a country of love and peace. If we can share our story with the politicians, like we did during the Academy, the members of Congress may feel the pain people experience, and may be more willing to accept people who are in dire need of support.

Politicians are also human beings, and only human beings can feel the pain of other living beings. To make this more effective, we have to educate our people to become citizens because every citizen’s vote counts. Let’s all spend a few hours giving back to this country. Let this country feel that refugees and migrants are an integral part of this country’s development.