Alternatives to ICE Detention for Non-Citizens of the United States

When noncitizens are apprehended at the border, or within the United States, they can be detained by several federal government agencies before or during their immigration proceedings.

In this article, we lay out important background information on detention, including the number of detention centers, their cost, average daily population – as well as humane alternatives to the practice of detaining migrants and asylum seekers.

How many ICE detention facilities are there?

There are approximately 200 detention facilities used to detain immigrants and asylum seekers. These facilities are a mix of detention centers operated by ICE, private contractors, and local county jails with active 287(g) agreements – a program that allows state and local police officers collaborate with the federal government to enforce federal immigration laws. There are also three Family Detention centers, two in Texas and one in Pennsylvania, where both children and parents are detained together.

Private prison groups, like CoreCivic and GEO Group, operate the vast majority of facilities. In total, more than 75% of ICE detainees are housed in facilities run by five private companies. A USA Today investigation in December 2019 revealed “more than 400 allegations of sexual assault or abuse, inadequate medical care, regular hunger strikes, frequent use of solitary confinement, more than 800 instances of physical force against detainees, nearly 20,000 grievances filed by detainees and at least 29 fatalities, including seven suicides, since President Trump took office in January 2017 and launched an overhaul of U.S. immigration policies.”

How many people are in ICE detention?

According to the most recent government data, in Fiscal Year 2019, immigration authorities detained an average daily population of 50,160 immigrants throughout the year. 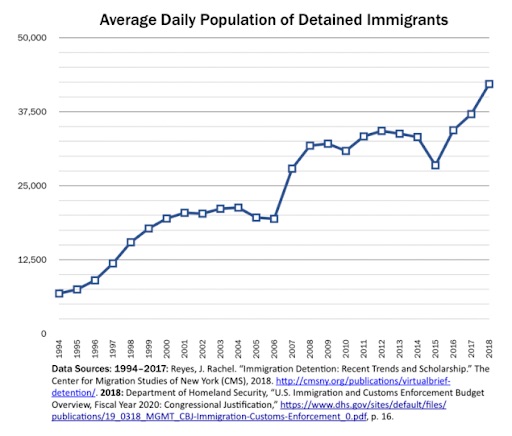 What is the cost of immigrant detention?

The cost of immigration detention varies somewhat based on the type of facility. In Family Detention centers, the cost of detaining a family is approximately $800 per day.

When there is a wave of arrivals of unaccompanied migrant children, the Department of Health and Human Services is responsible for increasing capacity and holding them in its custody. In some cases, like during the Trump administration’s shameful Family Separation policy, children were housed in temporary influx shelters that cost taxpayers $775 per child, per day.

The cost of ICE adult detention is approximately $134 per person, per day. Despite the fact that they have passed a credible fear screening, asylum seekers are often held in ICE detention at the same cost as other adult migrants. At the beginning of the coronavirus pandemic, there were approximately 6,000 asylum seekers detained in ICE facilities – or about 16% of all detainees – despite their legal right to seek protection in the U.S.

In total, ICE is spending more taxpayer dollars on detention than ever before. Since 2009, its detention budget has essentially doubled – from 1.8 billion to 3.5 billion in Fiscal Year 2019. 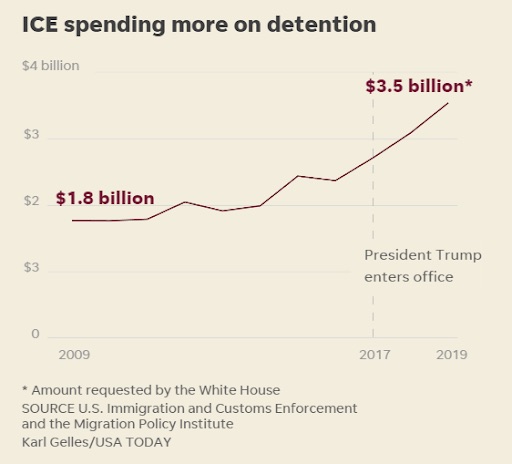 How long does it take to get out of immigration detention?

According to ICE data, the average length of detention so far in Fiscal Year 2021 is 83.9 days – meaning, it takes nearly three months, on average, to get out of immigration detention.

The duration of detention also depends on the type of facility that migrants are held in. For example, family units held in Family Detention centers are detained for an average of 156 days – or more than 5 months – before they are released or removed.

However, there have been many cases of noncitizens who are detained while defending themselves against deportation in immigration court who are routinely held for longer than six months. For example, filings in a 2013 class action showed that noncitizens who applied for relief from removal were held in California ICE detention centers for an average of 421 days. 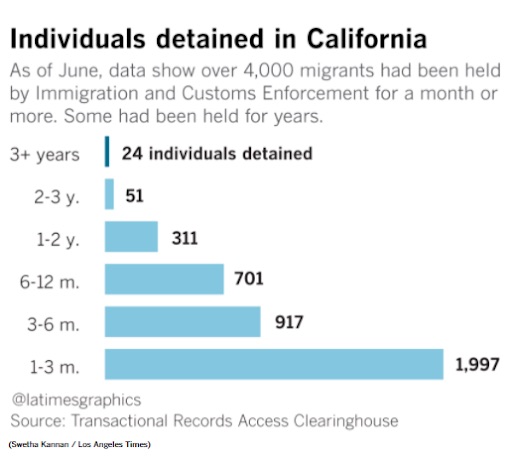 Migrants can request a detention review hearing, also known as a custody review hearing or a bond hearing, by making the request to the immigration court with authority over their place of detention at the time of filing.

If the immigration judge determines that a person is eligible for release, the judge then decides whether release is warranted, and if so whether to release the individual on their own recognizance, bond, or other conditions. Release is warranted if the individual does not pose a danger to property or persons and is likely to appear at future court hearings. The immigration judge also can modify the conditions of release set by ICE, for example, by increasing or decreasing the amount of bond or by ordering the removal of an ankle monitor.

Once a person has been ordered removed and has exhausted or waived any appeals, ICE can detain the person while arranging deportation. However, in certain circumstances, ICE may be unable to execute the removal order. For example, the person may come from a country which does not accept individuals with final orders or the foreign government may refuse to issue travel documents to permit return. In those circumstances, ICE may seek to detain a person for an indefinite period of time until deportation becomes possible.

What is an ATD program?

An ATD program is an alternative to detention program. Rather than funneling migrants into facilities that detain families and individuals, these programs allow for their release as their immigration cases proceed, while boasting high rates of compliance with immigration requirements. The Government Accountability Office (GAO) found that 95% of those on “full-service” alternatives to detention appear for their final hearings.

It is important to note that not all alternative to detention programs are created equal – in this article, we cover two main models used by immigration authorities: ISAP and FCMP

The program is run by BI Incorporated, which is owned by GEO Group—a for-profit company that owns an expansive network of prisons and detention centers. Because immigration judges must prioritize detained cases, ISAP enrollees must often wait several years before their cases are heard, while wearing an uncomfortable ankle monitor that many advocates have pointed to as overly invasive and dehumanizing.

The cost of enrolling foreign nationals in the ISAP III program depends on the method of management, but the average daily cost per participant in FY2018 (through July 2018) was $4.16, as opposed to the average cost of ICE adult detention – $134 per person, per day.

What is the Family Case Management Program?

The Family Case Management Program is a community-based alternative to detention. Its core principle is that families who receive case management support with their immigration case, as well as support in accessing other services that they may need, will understand and comply with their case requirements, whether the outcome of their case is positive or negative.

The Family Case Management Program was extraordinarily effective in achieving the government’s goals of compliance with immigration requirements and outcomes, with more than 99% appearance rates at ICE check-in appointments and immigration court hearings. The program achieved these goals at a fraction of the cost of institutional detention – just $38 per family, per day as opposed to the $800 per family, per day cost of detaining families together.

Although launched in 2016 and planned as a 5 year program across the United States, Immigration and Customs Enforcement (ICE) terminated this alternative to detention program in June 2017, only one and a half years into its implementation.

Other Examples of Community-Based Alternatives to Detention

In the summer of 2018, Lutheran Immigration and Refugee Service was asked by the US government to help provide services to families reunited after they had been separated by the Trump administration’s “Zero Tolerance” policy.

The federal government currently spends $319 per day to detain an individual in family detention facilities. However, LIRS and its partners spent just $14.05 per person each day to provide community-based support to reunited families, including the wide breadth of services detailed above.

Join the fight for Migrant Justice

Sign up for our newsletter to learn more about immigration issues and how you can help build a more humane system that treats all of our migrant brothers and sisters with dignity.