At the end of September, LIRS led a mission to Tucson, AZ to bear witness to the conditions of detention centers and immigration facilities housing children and individuals.  The following story is part of a five-part series we’re calling”Border Trip 2018” — a firsthand account written by Pastor Clint Schnekloth, Board Chair of Canopy Northwest Arkansas. To read the series in its entirety, you can go here. To start with the first article in this series, click here.

On Monday morning, our group traveled back into the desert, this time north of Tucson into the Santa Catalina mountains, our destination a site for unaccompanied minors. Unaccompanied immigrant children apprehended by the Department of Homeland Security (DHS) immigration officials are transferred to the care and custody of the Office of Refugee Resettlement (ORR). According to ORR, “The majority of unaccompanied alien children are cared for through a network of state-licensed ORR-funded care providers, most of which are located close to areas where immigration officials apprehend large numbers of aliens.”

Our observation mission included visiting one of these state-licensed providers.

The last mile of dirt road leading up into the Santa Catalina mountains is so narrow, our white van pulls to the side more than once, allowing pickups to pass. Our destination is Sycamore Canyon Academy just outside of Oracle, Arizona (population 3600). The camp is managed by Rite of Passage, an entity out of Nevada that offers a continuum of care to troubled, at-risk and vulnerable youth.

Paul the program manager greets us at the parking lot and welcomes us into the front offices. We spend time introducing ourselves (he checks each name off on his clipboard, a lower key security process than the entry at Eloy), and he gives us some history on the philosophy and founding culture of Rite of Passage. Then we begin our tour. 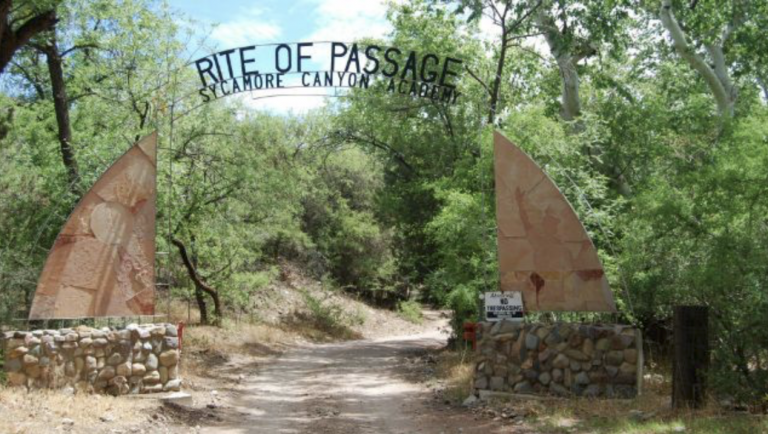 The first thing you notice about Sycamore Canyon Academy are the sycamores. They’re immense, some of them 600 years old or older. These camp facilities, tucked in right next to federal lands, run along this part of the canyon mostly in the shade of the sycamore trees.

Our first stop is an interdenominational chapel which they use as a classroom during the week. Three groups of students are at their desks. One group is using an online Google-based resource to study math. A second group is learning social studies and history. A third group is practicing English at a chalkboard.

So far, all the staff seem incredibly attentive, kind, and mission-focused. Because we had been hearing so much about family separation and unaccompanied minors on the news, I wasn’t quite sure what to expect in this site visit, but some aspects of it were quite different than what I had imagined.

It may help to know some background.

So if you were the staff of this camp, you’d probably develop a certain kind of reaction to public scrutiny, and be somewhat wary of visitors. Or at least, that is what I had anticipated. However, the experience was quite different. The staff was excited to host guests. They had an extensive tour planned, and they were proud of their work. I mean, I’m sure they had prepared the kids for our visit and coached them on how to behave around visitors, and I’m sure everything was extra clean, but overall the visit made a positive impression.

The primary negative about the camp was its remoteness. The children had clean, attractive living quarters and lots of space to play soccer and basketball.

There was a clear process in place from time of arrival until they were placed with sponsors.

We asked a lot of questions while we were there. The biggest revelation was concerned the length of stay. The director indicated that up until recently, the length of stay for the boys (ages 12-17) was around 21 days if they had identified a parent to whom they could be released, closer to 35 days if they were being released to a sponsor like an aunt or uncle, and closer to sixty days if the sponsor was a more distant relative. But because of new regulations for fingerprinting of sponsors, there had been a dramatic slow-down and the boys were staying much longer at the camp than previously.

The other half of the camp serves a completely different population. It is a residential treatment facility for young men. This mixing of populations was also present at Eloy. The immigrant population is regularly mixed in with other populations whose needs and reasons for institutionalization are different. Although both populations are definitely in need of services, bringing such populations together inevitably blends the type of care provided to both, in a way that confuses asylum-seekers and their needs with criminal populations and their needs.

On the other hand, many left-leaning critics of such institutionalization may not understand that these unaccompanied minors arrived in our country unaccompanied. It’s appropriate and good that we made lots of noise about separation of families. But the majority of youth do not arrive at the border with their families. The separation happens prior to arrival. Given that reality and given the large number of unaccompanied minors arriving at our border, it is appropriate to put in place a care-focused system that protects youth and ensures they make their way to safe, appropriate sponsors.

In other words, we can’t do without such facilities. The more important focus should be on creating the best and most caring contexts to house unaccompanied minors while we expeditiously get them connected with family or caring adults.

Towards the end of our visit, Paul mentioned this was their first real outside group tour of the facility. I found this astounding. Given all the appropriate noise about family separation and unaccompanied minors, why hadn’t more groups visited? Paul said that although he had frequently had groups say they were going to come out, they all cancelled, stating their previous trips to Eloy and other locations had consumed too much time, and they just couldn’t find time to make it all the way out to Sycamore Canyon.

Admittedly, it really was quite a drive out there. But the lack of outside visits indicates a laziness on the part of advocates. The result: unaccompanied minor camps are mostly unobserved, unknown and disconnected from community.

Not all shelters are the same, and some are less open to visits from outside. In fact, unlike Sycamore Canyon, which had many internal controls in place for quality of care and was quite open to a scheduled visit from LIRS, another shelter in Tucson, Southwest Key, recently had its license for holding migrant children revoked after it failed to prove it complies with background check requirements. Not just coincidentally, Southwest Key also happens to have denied repeated requests from LIRS to visit their facilities.

Regardless, the politicization of immigration and in particular unaccompanied minor immigration has left such populations even more isolated than they otherwise might be. The fault of this lies with the left as much as the right, and a third way is needed.

Next up in the series: Breaking Down the Barriers.