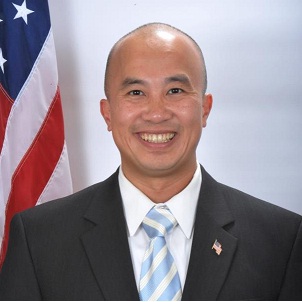 One of the great things about my work is that it brings me into contact with so many immigrants and refugees whose leadership is truly rooted in a love of their community.

One of those people is Chris Phan, who immigrated from Vietnam when he was eight years old. Among his many accomplishments are his military service in Iraq as the legal counsel of a SEAL squadron, and his work as chairman of the board of Saint Anselm’s Cross Cultural Community Center, a non-profit organization located in Garden Grove, CA that serves immigrants, refugees, and low-income clients.

At LIRS, we’ve been lucky enough to have him join our delegations to Capitol Hill on World Refugee Day to ask Members of Congress to be refugee champions.

The latest chapter of his life brings him to elected office. I was fortunate to have a chance to check in with him on this development:

LH   You were recently elected to the city council of Garden Grove, California. How does that feel, and what milestones do you think this victory marks for the people you’ll represent?

CP   I am not the first Vietnamese American elected to public office in the United States, nor was I the first Vietnamese American elected to the Garden Grove City Council.  However, I feel tremendous pride, because I showed that one could be elected without spending much money.  I had this theory that getting elected to local office is not too difficult.  Just take time to meet the voters and they will elect the candidate if they see genuine sincerity and a desire to serve.  I walked 10 months every day between 3-5 hours to meet the voters.  It paid off.  I was elected to one of two open seats, spending less than $20,000 while one of my opponents spent nearly $100,000.

The city and in particular the Vietnamese-American community are very happy that I was elected.  The people wanted a fresh face and a younger person to lead our city into the future.

LH   What has it been like to come from a refugee background to represent your community in America’s democratic system?

CP   It has been simply a dream come true.  My dream of running for office began when I was a young boy who just arrived in the United States.  However, I wanted to give back to America first, for the freedom she gave me, by serving in our military.  Therefore, after law school, I served in the U.S. Navy Judge Advocate General’s Corps (JAGC) for eight years on active duty.  I requested my final tour to be in California so that I could get to know our community better.  I moved to Garden Grove in 2008 and developed my contacts.  In 2012, I decided to run for city council, because the timing was right.  It was a year-long labor of love to campaign door-to-door, but it worked out in the end.

LH   What do you most hope to achieve for your constituents?

CP   I hope to unite our diverse city, make our city stronger financially, make our city more beautiful, improve safety, and be a good role model for the younger generation.

LH   You’ve played a leadership role with LIRS on World Refugee Day. Could you tell us a little about what that has involved?

CP   I was honored to be invited by LIRS to advocate with our Congressional leaders about the importance of funding refugee programs.  It was great to meet leaders from all over the United States to advocate for our noble cause.  As a former refugee, I was proud to advocate for and support the people who need it most.  The experience was also a great bonding opportunity with other refugees who have succeeded in the United States.

It’s been an honor to have Chris Phan stand shoulder-to-shoulder with us on Capitol Hill, and I hope you’ll join me in wishing him the best on the Garden Grove City Council!