For 80 years, Lutheran Immigration and Refugee Service has assisted forcibly uprooted people from around the globe. But increasingly, we are seeing an unprotected group seeking refuge: persons who are displaced, in whole or in part, due to climate disasters.

What is the definition and scope of climate displacement?

The United Nations High Commissioner for Refugees (UNHCR) estimates there are 20 million people internally displaced every year due to extreme climate disasters. At LIRS, we refer to the populations moving due to sudden- and slow- onset disasters as “climate displaced persons” and the type of forced migration as “climate displacement.” In the 2021 Groundswell Part II Report, the World Bank Group estimates that by 2050 there will be 216 million people internally displaced due to climate change. Already, the Internal Displacement Monitoring Centre (IDMC) explains that climate disasters displaced more people than conflicts in 2020.

What is causing climate displacement?

Sudden- and slow- onset climate disasters each have unique and severe impacts on vulnerable populations. Sudden-onset disasters, including flash floods, severe storms, hurricanes, and large-scale forest fires, usually cause short-term, internal displacement. In some cases, where individuals and communities are displaced annually or semi-annually, on-going climate change will exacerbate the impact and severity of sudden-onset disasters.

The short answer is yes! The 2021 Intergovernmental Panel on Climate Change (IPCC) report on climate change is a “code red” for humanity. Under intermediate, high, and very high emission scenarios of the 2021 IPCC report, global temperatures will increase by 1.5 degrees Celsius or 2.7 degrees Celsius by the end of the 21st century. This level of warming, which climate data shows is linked to growing carbon emissions, is already causing major consequences for our planet and is contributing to ice sheet melt, glacial retreat, ocean warming and acidification, loss of biodiversity, and shifting weather patterns.

Who is most vulnerable to climate displacement?

The 2021 Groundswell Part II Report estimates that a majority of persons displaced due to climate disasters will be in Sub-Saharan Africa, South Asia, and East Asia and the Pacific. Small Island Developing States (SIDS) across the Caribbean, the Pacific, and the Atlantic, Indian Ocean, and South China Sea are uniquely vulnerable to slow-onset climate disasters, especially sea level rise and loss of biodiversity due to global warming and the subsequent thermal expansion and ice sheet and glacier melting. In light of this, the United Nations (UN) has officially recognized the unique environmental vulnerability of SIDS and is working to advance climate resilience and adaptation programming to support groups vulnerable to climate displacement.

While there remains ample debate on terminology surrounding climate change and climate-related mobility, we have intentionally chosen to use the term “climate displaced persons.” The term “migration” is often thought to infer a predominately voluntary decision to migrate while displacement implies that there were existential factors that forced an individual or a community to relocate for adaptation or survival. Given that sudden- and slow- onset climate disasters cause serious harm and destruction to communities, including an estimated 150,000 lives lost annually according to the World Health Organization, we believe utilizing the term “displacement” better articulates the mobility that is happening in the context of climate change and climate disasters, i.e., movement to protect oneself from imminent danger.

The usage of the terms “climate displacement” and “climate disaster displacement” are also utilized by esteemed colleagues at the Sierra Club, Oxfam, the United Nations High Commissioner for Refugees (UNHCR), and other U.S.-based resettlement agencies and refugee rights and mobility focused non-profits across the globe.

Those that qualify as refugees have certain rights, including non-refoulement, which means a host country should not return a refugee to its country of origin. As it stands, climate displaced persons who are not otherwise eligible based on the above definitions do not receive protections that are afforded to refugees that meet the definition. This means that receiving countries are not legally obligated to protect persons displaced by climate disaster that are not otherwise deemed refugees and, under international law, can return them to their countries of origin. Nevertheless, the 1969 Organization for African Unity (OAU) Convention, a regional complement to the 1951 Refugee Convention, allows protection for groups fleeing “events seriously disturbing public order,” which has been used to protect groups fleeing climate disasters.  This convention has been used at a regional level by the African Union (AU) to provide protections to persons displaced internationally due to climate disasters through the Kampala Convention. While this language does not yet exist in an international convention, its regional usage and implementation does provide optimism for a future where there are international protections provided to climate displaced persons.

What are the biggest challenges facing climate displaced persons?

As climate change continues to exacerbate sudden- and slow- onset climate disasters, the international community must come together to address the systemic challenges and hurdles that face communities vulnerable to climate displacement. Some of these challenges include:

What are potential protection pathways for climate displaced persons?
What is LIRS doing to help?

What is the international community doing to help?

In 2018, the international community took an important step in recognizing climate-displaced persons through the adoption of the Global Compact for Migration (GCM). The report includes a section on migration which identifies climate change as a driver of migration and suggests countries work together to start planning for people who move due to disasters and climate change. While the report was overwhelmingly adopted by 164 countries, the US did not adopt the document.

The International Migration Review Form (IMRF) took place in February 2022 and focused on the successes and challenges of the implementation of the 2018 Global Compact on Migration and the 2030 Agenda for Sustainable Development. During this conference, global leaders worked to streamline processes and strengthen the regional implementation of the Compact to provide better protection for vulnerable groups, including climate displaced persons.

At the 26th annual UN Climate Change Conference (COP26) in November 2021, international leaders met to discuss greenhouse gas emissions and negotiate commitments to reduce emissions. While the conference mainly discussed country-level emission pledges, there were discussions that took place surrounding climate change adaptation for vulnerable groups. During the conference, the U.S. pledged a remarkable $356 million to the Adaptation Fund, intended to support low-income countries’ adaptation to climate change. Nevertheless, there remained inadequate commitments and discussions made surrounding climate displacement and protections for these vulnerable groups.

It cannot be ignored: climate disaster is estimated to become one of the largest drivers of displacement in the 21st century. Most of the displacement will take place internally and is temporary. However, as global carbon emissions continue to escalate the impacts of climate change and the occurrence of slow-onset and irreversible climate disasters, millions of people will be at risk of international displacement that is increasingly protracted and permanent.

Nevertheless, mechanisms exist that will ameliorate these issues and ultimately, provide assistance and protection for populations in climate-vulnerable regions.  We need to reimagine and make substantial changes to our immigration system to protect these populations vulnerable to climate displacement. Read LIRS’s recommendations for the Biden administration, Congress, and all our leaders in our Climate Displacement Report below. 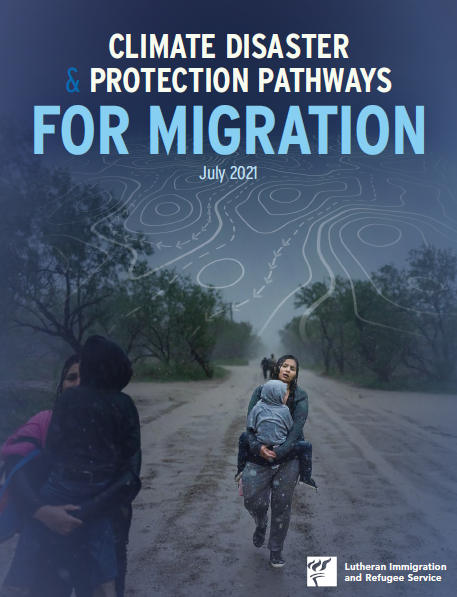 Read the Report
Read the Summary

“Through nature, God teaches, communicates, and provides for the needs of humans. We are called by scripture and morality to partner with God in preserving, healing, and sustaining what God has granted us: our world, its people, and the beauty of creation…”

Christians are called to care for God’s creation, including the planet, its people, and all its fantastic creatures and natural wonders. Read more in our faith response below.