‘Do or Die’ Moment for Fair and Humane Immigration Reform 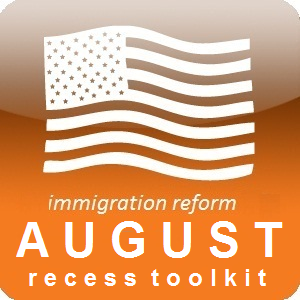 “August is a month in which either legislative proposals die, or they survive.” — Sen. Robert Menendez, (D-NJ), co-author of the Senate immigration reform bill (Associated Press, July 18, 2013)

“I pay more attention to what I hear in my district than what I do from various groups.” — Rep. Charles Boustany, (R-LA) (Associated Press, July 18, 2013)

The quotes above confirm what we all know: We’re at a pivotal moment in our efforts to pass a compassionate immigration reform bill that truly embodies our biblical call to welcome the stranger. We need you to act, using the LIRS August Recess Toolkit for Action.

The urgency of this moment is why LIRS is calling on all Lutherans to rise up, take action, and be an effective voice for immigrants and refugees at this crucial time in our nation’s history.

Why is this a critical time to act? The Senate passed a bipartisan comprehensive immigration reform bill (S.744) in June, but the House of Representatives has yet to show the same kind of bipartisan leadership. While new polls show that a majority of Americans support immigration reform and respectable reports including one from the Congressional Budget Office have shown that immigration reform will boost the economy and reduce our budget deficit, House Republican leaders are promoting a piecemeal approach to reform that promises, at most, to tinker with a few of the many ways our immigration system is broken.

Even worse, harmful immigration legislation has advanced on partisan votes through House committees. One of these bills is the SAFE Act, which would make it a crime to provide assistance or transportation to an undocumented person, would mandate even more detention of immigrants, while expanding a program that encourages racial profiling.

We have come too far in our struggle to be turned back now. The time is now for people of faith to raise our voices in support for compassionate immigration reform.

Once again, you can do that by using our August Recess Toolkit for Action. Please download and share it with friends, members of your congregation, family, neighbors, and colleagues. It provides you with resources for:

Thank you for personally taking action for fair and humane immigration reform in August. To say this is a make-or-break moment would be an understatement!