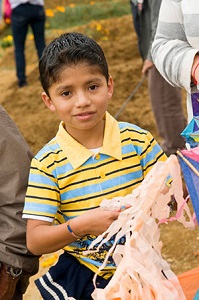 I’d like to share the story of Elias, a young boy from Guatemala who, after fleeing abuse, was reunited with his mother in Colorado with the help of LIRS and our partners.

Imagine being separated from your parent at a very young age. It’s an emotional turmoil no child should ever have to face, but that’s what happened to a young boy named Elias in Guatemala.

When his mother left him, she only did so to find work in the United States and provide for her son. So Elias was left in the care of his grandparents in Guatemala, where he could be closer to his school and continue his education. Soon, however, Elias’s world grew even more troubled when his grandparents began abusing him emotionally and physically. And on top of that, his classmates at school began bullying him.

Thankfully Elias’s mother was able to arrange for a guide to bring Elias to join her in Colorado. But after crossing the border in Texas, Elias was apprehended and placed in federal custody.

Soon he was reunited with his mother. But due to the language and cultural barriers they faced, life was not easy for mother and child in their new home in Colorado. They didn’t speak English or Spanish, so it was difficult for them to understand and connect with the people around them.

LIRS and intensive post-release services helped Elias and his mother find their confidence and regain their strength. We connected them with a Mayan language interpreter, a dedicated caseworker, and an attorney. And the caseworker who helped enroll Elias in ESL classes said, “The story isn’t just something that someone told us. It is what LIRS is doing every day.”

Thanks to you, many refugees and immigrants like Elias and his mother are rebuilding their lives in America. Every day.

This story was originally printed in Rebuilding Hope, our monthly newsletter where we share inspirational stories of the undaunted hope of migrants and refugees as they rebuild their lives here in the United States. You can sign up to receive the newsletter here. Plus, if you make a donation to LIRS, you can receive an expanded print version of the newsletter four times a year.