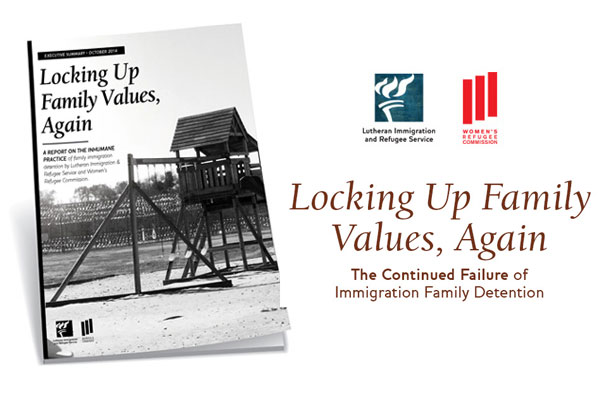 Since summer 2014, the detention of migrant families has skyrocketed under the Obama Administration, the majority of whom are fleeing violence and in search of safety. By the end of this year, the government will have capacity to detain almost 4,000 mothers and children. In comparison, just a few months ago fewer than 100 families were detained for immigration purposes. In response to this unprecedented expansion, LIRS and the Women’s Refugee Commission (WRC) released a joint report, Locking Up Family Values, Again an update to the 2007 report, Locking Up Family Values: The Detention of Immigrant Families.

The conclusion in “Locking Up Family Values, Again” is simple: there is no humane way to detain families.

The new report finds that as many as 98% of the families detained are seeking international protection that would allow them to remain lawfully in the United States. It also documented that more than half of all children who entered family detention in 2014 were six years or younger. The report describes inherently inappropriate conditions in these facilities including inadequate access to child care, medical and mental health care, and legal assistance. Children in detention are reported to be depressed, losing weight and suicidal. These findings again illustrate that large-scale family detention is not only inhumane, but also results in egregious violations of the United States’ obligations under international law, undercuts individual due process rights, and sets a poor example for the rest of the world.

After visiting one of the facilities, Antonio Ginatta, Advocacy Director for Human Rights Watch reflected in the report:

Karnes was quite the visit for me. There’s nothing like walking into a prison and the first thing you hear is a crying baby. Two things that should never go together. Never ever.

Vulnerable people seeking safety on our shores deserve better. They deserve welcome and compassion. To ensure that the families who seek refuge within our borders are treated with fairness and dignity, our report recommends that the government end the expansion of family detention and expand alternatives to detention.

We invite you to read and share this new report to help lift up the stories and experiences of these families.

Join LIRS by taking action online through our Action Center to urge your elected representatives to end this inhumane practice and invest in compassionate, cost-effective alternatives.