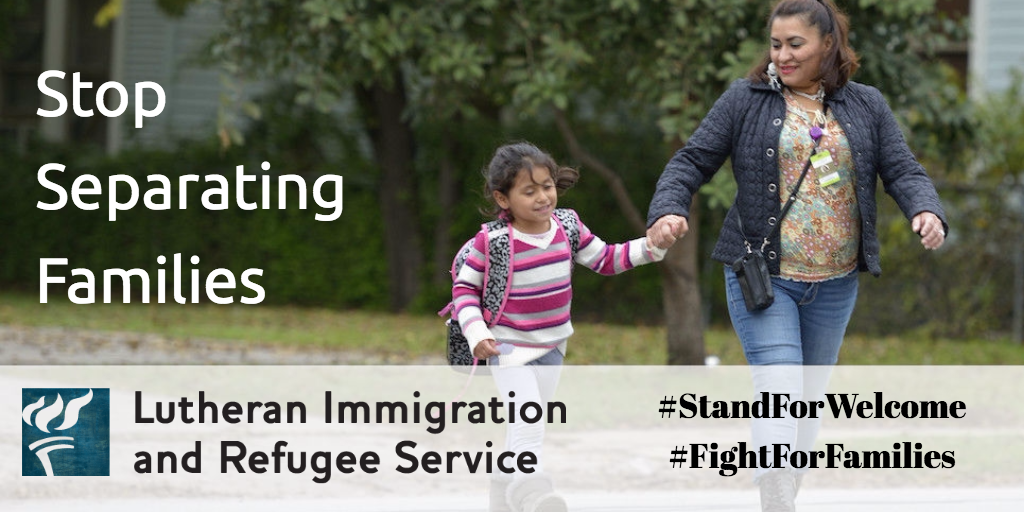 As we celebrate International Day of Families on May 15th, we are thankful for the blessing of togetherness. Unfortunately, not all families have this luxury. Many refugee families from Central America make the brave decision to uproot their families and come to the United States in search of protection. However, many of these families will be separated by immigration statuses or even detention bars after reaching the U.S. LIRS and our partner organizations have noticed an alarming trend of arbitrary and harmful family separation. Young children are separated from their parents or caregivers when they reach the U.S. border—the exact place where they had hoped to find refuge.

In one case, 6-year-old Estrella was separated from her aunt and cousin. Estrella’s aunt fled to the U.S. with these children when life in Central America became too dangerous. Severe medical and cognitive needs render Estrella immobile, so Estrella’s aunt carried her throughout the month-long journey and made sure Estrella remained healthy. This family hoped to reach safety and rejoin Estrella’s father in the United States.

After Estrella, her aunt and cousin arrived at the border, they were apprehended by the Department of Homeland Security (DHS), Customs and Border Protection (CBP). CBP promptly separated Estrella from her aunt, her primary caregiver, who provided Estrella with necessary 24-7 care. Ignoring Estrella’s needs and the principle of family unity, DHS Immigration Customs Enforcement (ICE) locked up Estrella’s aunt and cousin in a prison-like family detention facility.

Once LIRS learned of Estrella’s situation, we worked diligently to reunite the family and provide Estrella with appropriate care. Eventually we secured the release of Estrella’s family from detention, allowing the reunification of Estrella, her aunt, and her cousin with Estrella’s father.

While the ending to Estrella’s story is a happy one, for many the story will not end with reunification. Families are regularly separated by CBP and ICE enforcement tactics. LIRS and our partners have seen spouses split apart when apprehended at the border, toddlers separated from their mothers, children arrested by immigration agents on their way to school, and mothers and children locked in detention for indefinite periods of time.

The consequences of family separation are immense, possibly leaving a lasting and damaging impact on childhood development. On International Day of Families, we ask that our government reshapes our immigration policies to respect our family values. As experienced care providers to refugee and migrant children, we know children are best cared for by their family members. As Lutherans, we believe family unity must be respected. As Americans, we call on our government to stop separating families.

Stand with us as we ask that all families be able to celebrate International Day of Families together. Please retweet this message or use #StandForWelcome and #FightForFamilies to make your voice heard.