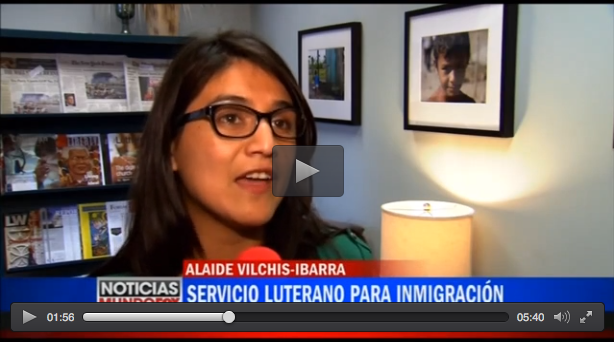 It is estimated that nearly 80,000 unaccompanied immigrant children will cross the southern U.S. border this year. On Monday June 2, President Obama declared this influx a ‘humanitarian crisis.’ He directed federal agencies, including the Federal Emergency Management Administration (FEMA), to provide the children with much needed food, medical treatment, and mental health services. Despite the President’s action, Congress continues to stall on the issue with a lack of response.

A segment featuring this issue, and LIRS, recently aired on Fox Mundo, a Spanish speaking news network. Titled, “Jeh Johnson Says the Exodus of Children at the Border is Due to the Wave of Violence in Central America,” it specifically focuses on the federal government’s response to the crisis. The segment shows clips of overwhelmed children’s shelters along the border and offers a short statement from the Secretary of the Department of Homeland Security, Jeh Johnson. Johnson explains that this large migration of children is happening due to poverty and violence in Central America. Many Central American consulates have reacted to the crisis by sending representatives to the border to aid the relief efforts. Additionally, Johnson expresses that until there is a solution targeting the problem at its root in the Central American nations, there will be a continued influx of migration to the United States.

What the Senate subcommittee is doing is giving more funds to the Department of Health and Human Services, which is the department that takes care of the children, and [they are] giving more flexibility to move the funds if they need them.

LIRS is thankful for Fox Mundo for featuring this critical issue. There is much that can be done on behalf of these unaccompanied children. To take action, visit the recently launched #Actoflove campaign webpage where you can send a thank you note President Obama for his declaration of this issue as a humanitarian crisis or you can sign a petition urging congress to take action.