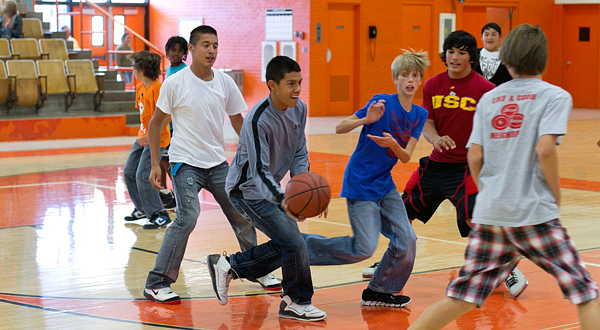 Mexican census figures show that fewer Mexicans are migrating to the United States and many are returning to Mexico — leaving net migration at close to zero, Mexican officials say. Arrests by the U.S. Border Patrol along the southwestern frontier, a common gauge of how many people try to cross without papers, tumbled to 304,755 during the 11 months ended in August, extending a nearly steady drop since a peak of 1.6 million in 2000. Alongside the bleak jobs picture is a trek that has grown riskier and more expensive because of stepped-up enforcement on the U.S. side, a crackdown that at the same time has prompted many migrants to stay in the United States rather than try to cross back and forth. Migrants also cite an increasingly hostile political climate north of the border, as expressed in state laws targeting undocumented immigrants. [LATimes]

The Montgomery police arrested 13 people protesting Alabama’s strict new immigration law. About 100 people, most of them Hispanic and college-age, took part in the protest Tuesday at the Statehouse and nearby Capitol. A Montgomery lawyer who volunteered to represent those arrested said he understood they were mostly being charged with disturbing the peace, but also could be held by immigration officials. Earlier this month, organizers from Alabama and around the country convened a training session for immigrant leaders in rural Albertville, where chicken plants rely heavily on Latino labor. They went from trailer home to trailer home, signing up volunteers to build immigrant networks that will help people protect one another while fighting for repeal of the law and integrating themselves into the life of their state. [Associated Press & NYTimes]

In the past few months, the roster of companies in a revamped, voluntary immigration enforcement program, the ICE Mutual Agreement between Government and Employers (IMAGE), has expanded by nearly one-fifth as the Obama administration steps up employer audits. According to ICE officials, the benefits of its IMAGE program can include lower fines and can enhance a company’s image. The agency says it will train IMAGE participants on proper hiring procedures, fraudulent document detection, use of E-Verify and anti-discrimination procedures. [Huffington Post]

For generations, the story of the small rural town of the Great Plains, including the dusty tabletop landscape of western Kansas, has been one of exodus — of businesses closing, classrooms shrinking and, year after year, communities withering as fewer people arrive than leave and as fewer are born than are buried. However, Hispanics are now arriving in numbers large enough to offset or even exceed the decline in the white population in many places. In the process, these new residents are reopening shuttered storefronts with Mexican groceries, filling the schools with children whose first language is Spanish and, for now at least, extending the lives of communities that seemed to be staggering. [NYTimes]