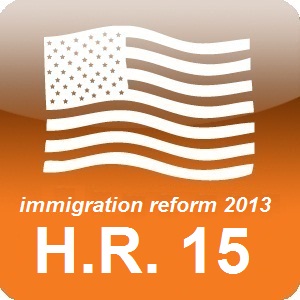 Now is the time for the House of Representatives to enact the immigration reforms included in H.R. 15, which offer an opportunity for America to advance towards a more fair and welcoming set of immigration laws.

H.R. 15 makes strides to promote increased family unity, which is vital to our congregations and communities, and offers smart solutions for our economy and country.

Congress needs to act quickly to pass smart reforms like those included in H.R. 15 in order to continue its work to help unite families, welcome people fleeing persecution, and provide newcomers with a fair and accessible roadmap to citizenship.

Many of H.R. 15’s proposed changes to the U.S. immigration system would benefit migrants and refugees, including the provision of a roadmap to citizenship for undocumented immigrants, substantial changes to legal immigration processes, protections for refugees and asylum seekers, and improvements to the enforcement of immigration laws including immigration detention.

LIRS will continue to work towards passage of comprehensive immigration reform that reflects American values by:

•    Providing a roadmap to citizenship for undocumented immigrants and their families
•    Ensuring humane and just immigration enforcement, specifically by reducing use of detention
•    Safeguarding families from separation and ensuring sufficient visas for families seeking to reunite
•    Promoting integration of those fleeing persecution and of other vulnerable migrants
•    Protecting U.S. citizen and migrant workers

If you’re just learning about immigration reform or want more materials for your advocacy, you’re in the right place! We’ll soon be offering analyses of H.R. 15.

For now, to get a closer look at aspects of immigration reform legislation dealing with the roadmap to citizenship, humane enforcement of immigration laws, preservation of family unity, protection of vulnerable migrants, and provisions for workers, see LIRS’s in-depth analyses. For the latest on the legislative process on Capitol Hill, I invite you to check out the LIRS blog series “Immigration Reform 2013: The Update.” The LIRS Comprehensive Immigration Reform Mythbuster debunks common myths and misinformation.

Thank you for all your work to Stand for Welcome with immigrants and refugees!