I Stand for Welcome: Interview with Ralston Deffenbaugh 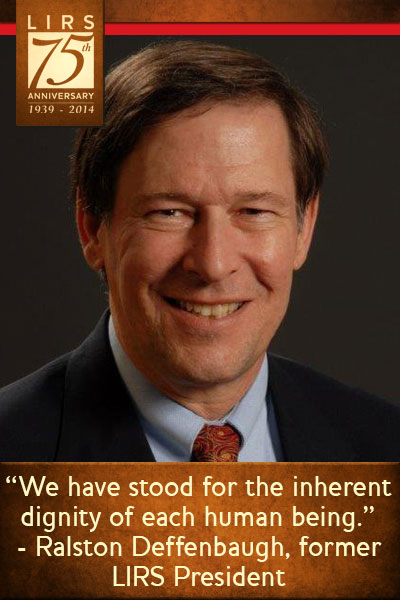 Our 75th anniversary year would not be complete without honoring the heroes who make our mission something to celebrate. Heroes of faith and compassion. Heroes of innovation and prophetic witness. And most importantly, migrant and refugee heroes of remarkable courage.

This blog series will feature exclusive interviews with leaders from LIRS past and present, leaders committed to the long welcome, to ensuring migrants and refugees become not only self-sufficient, but connected and valued members of their communities. This interview with Ralston Deffenbaugh, former LIRS President and lifelong champion of migrants and refugees, was conducted by former Lutheran Volunteer Corps member Luke Telander.

Luke Telander (LT): What is it about your own personal background that led you to dedicate so much of your life to welcoming migrants and refugees?

Ralston Deffenbaugh (RD): I’m a lawyer- a human rights lawyer working for the church. When I was in law school, I took a year off to volunteer with the Lutheran World Federation. I was sent to Namibia, then under South African rule, to observe political trials and help with the churches’ legal defense efforts. This was a formative experience, to see first-hand a situation of great injustice and suffering, but also to see how the church’s international solidarity could help support people and be a force for justice. Later on, when the UN peace plan for independence for Namibia was finally being implemented, I was invited by the Lutheran bishops to serve as their legal advisor during the year of transition. It was a joy for me to have a small hand in helping that nation go from war to peace, from foreign occupation to freedom, from apartheid to legal equality. The role of the church was crucial to the success of the transition.

Shortly after my return to the United States, the head of LIRS, Rev. Donald Larsen, suffered a heart attack and died in May 1990. I was encouraged to apply for the position and am very grateful to have been chosen and to have been able to lead LIRS over such a long period. It’s been a blessing to be able to help victims of injustice to start new lives, and to work through advocacy so that our international and U.S. systems for refugee protection are more generous and welcoming. Again, the role of the church has been crucial.

LT: Can you tell us in a little more detail about the most memorable experience you’ve had with refugee resettlement?

RD: There are so many memories. Some of the ones that come to mind:  Seeing children who arrived without any English excel in school and have opportunities that could never have been dreamed of in the country they fled.  Working to revive the UN Refugee Agency‘s (UNHCR) commitment to resettlement, which was in danger of being abandoned. Working to revive the U.S. program for unaccompanied refugee children, which in one year had shrunk to only one arrival. Helping to re-open America’s doors for African refugees. Working with partners to accomplish the resettlement of the so-called “Lost Boys” (and girls!) of Sudan. Working for the resettlement of the Burmese Chin who had landed on Guam, of the Bhutanese who had been stuck for 20 years in Nepal, of the Burmese from Thailand and Malaysia. And on a more personal note, receiving a letter from a Haitian refugee who had been resettled through LIRS that was addressed to “Ralston, my Savior.” I had to remind her that Jesus is her Savior, not me.

LT: To you, what is the most notable way LIRS has evolved over the course of its history?

RD: I was selected to lead LIRS in large part because of my experience in advocacy. LIRS has related to government throughout its history. However, as we have evolved, we have seen that advocacy is an integral part of the mission, equal in importance to the provision of services. Service and advocacy are mutually reinforcing; each one strengthens the other. As a result, more people can be served and more people are welcomed in dignity.

LT: In your opinion, what makes LIRS unique?

RD: LIRS has a number of special strengths. First is its firm rootedness in faith as a ministry of the Lutheran church. Another great strength has been the national network of Lutheran social ministry organizations through whom we work to welcome refugees at the local level. Another has been the clear understanding of the interrelationship between service and advocacy. LIRS has been well-rounded, with concern not only for refugee resettlement but also for unaccompanied children, for asylum seekers and for those in immigration detention. And last but not least, LIRS has clearly understood its mission and calling and has been principled in doing so. We are not afraid to say no to government when what is asked is inconsistent with our mission. We strive for excellence and highly value integrity.

LT: How have you seen the immigration debate evolve over the course of LIRS’s work?

RD: I have seen the attitudes toward immigration take pendulum swings. At times our country has been more generous and open, at other times more fearful and restrictive. When I started at LIRS, the immigration debate was not partisan; then, over time, many in the Republican Party started taking anti-immigrant positions. The last election showed, fortunately, that that was not very good politics. Pro-immigration Republican voices are rising again. I hope that this year we will finally have immigration reform.

LT: How is LIRS’s grounding in faith integral to its work?

RD: It is vital. It is the rock on which we stand. You can’t argue with what Jesus says in Matthew 25: “I was a stranger and you welcomed me.” And for us Lutherans, we are grounded on our special history right after World War II, when one out of every six Lutherans was a refugee or displaced person. To this day, the Lutheran World Federation is the largest faith-based implementing partner for the UNHCR. As Lutherans, we believe that we are freed by grace to love and serve the neighbor. Welcoming refugees and migrants is one way we respond to God’s love for us.

LT: How have your preconceptions been challenged by your experiences with migrants and refugees?

RD: I try to be charitable, to assume that people are acting in a good way, to put the best construction on a person’s words and deeds (see Luther’s Small Catechism, on the 8th Commandment). It’s shocking to me sometimes to see how emotional and fearful, even virulent and hateful, some people can be against migrants. Don’t they see that there, but for the grace of God, go they?

LT: In your experience, more than simply providing services, how has LIRS empowered refugees?

RD: We have stood for the inherent dignity of each human being. We have treated people with dignity and respect, no matter their legal status or personal circumstances. When people are valued and treated with respect, they can in turn take on their role as full members in the community.

LT: What do you think LIRS will achieve in its next 75 years?

RD: When I was leading LIRS, I would say that we need to plan for uncertainty. No one plans to be a refugee. No kid wants to grow up without a family. Nobody in immigration detention hoped to be there. We don’t know where the next conflict or persecution will break out, or who the next refugees will be. But what we do know is that in this broken world there will, unfortunately, be many more people in need of protection for many more years to come. I am confident that LIRS will be there for them. And I am confident that LIRS will continue to carry out its vital work with imagination, integrity, high quality, and deep commitment. As my Lutheran church’s slogan puts it, “God’s work.  Our hands.”