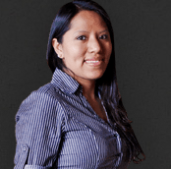 On this blog, I try to share both my thoughts and those of others standing for welcome at LIRS and nationwide.  Today, I’d like to introduce an interview by Luke Telander, Program Associate for Outreach at LIRS, with immigrant rights activist Jessica Colotl.

When Kennesaw State Senior Jessica Colotl got into her car on March 29, 2010, the idea that she would spark a fierce debate on the American immigration system probably never crossed her mind.  Jessica, an aspiring lawyer less than three months away from graduation, was faced with the harsh reality of immigration in today’s America when she was arrested by campus police for “impeding the flow of traffic,” leading to a courtroom odyssey that would drag on for nearly three years until the charges against her were finally dropped last month.

While she was held in immigration detention, Jessica was a firsthand witness to to the system’s terrible conditions and lack of basic human rights.  U.S. immigration detention centers at times fall below U.N. standards, and detainees lack access to legal and other rights.  Though she felt abandoned by her country, Jessica was not alone, and through the activism of her sorority sisters and other friends and family, her case gained national prominence and sparked a fierce debate in the media about DREAMers and immigration reform.

On January 10, the charges against Jessica were finally dropped and her whirlwind legal drama was over.  She has since only become a stronger advocate for immigrant rights, teaming up with the National Center for Civil and Human Rights to speak out on the need for humane and just comprehensive immigration reform.

I was lucky enough to catch up with her through an email interview.  Here are her thoughts:

Luke Telander (LT): You experienced first-hand what it’s like to be detained. What’s the most important thing you want everyone who reads this to know about the U.S. immigration detention system?

Jessica Colotl (JC): The most important thing that I want everyone who reads this to know about the immigration detention system is that the system is completely flawed and has the most inadequate medical care. It has worse conditions compared to any other detention system. I was held in three different detention facilities. The conditions of the first two county facilities were not as bad. For example food, housing, and recreation were somewhat decent and at least you can call your family to tell them where you are, unlike in an immigration facility.

As soon as you are booked into an immigration facility, bad conditions are noticeable right away. First of all, you are not allowed to call your family to let them know that you have been moved to a different location. Second, you are welcomed by immigration guards who make you strip and take a shower in front of them. This is the daily routine; you can only take a shower with a group of inmates (usually six women in total) as they do not have individual showers. They serve the same food at every meal. Holding cells are just as bad. They are designed to house two inmates. Due to a high population of inmates, there were sometimes three to four inmates per holding cell. Not to mention recreation time; most of the times we are on lockdown for almost the entire day. Those were painful days because you could not do anything but pray and pray. I really hope that the U.S. immigration system can change in the near future.

LT: What kept you going when you were detained, and what keeps you going now, in the face of injustice?

JC: Close friends, family, and mostly my faith kept me going in the face of injustice. Thanks to them as well as the great team of legal experts that were and continue to be by my side, I am still standing strong today.

LT: What’s the mission of the Freedom Mosaic by the National Center for Civil and Human Rights and how did you get involved?

JC: The mission of the National Center for Civil and Human Rights is to continue the universal search for a secure human existence in a way that inspires vigilance and leadership among future generations. I got involved through a professor from Kennesaw State University who is now working for this project. She contacted me, talked to me about this amazing project and invited me to be part of it. I thought it was a great project to be part of and we decided to work on it.

LT: In your video for the Freedom Mosaic, you talk about your experiences in detention. How have these experiences changed your perception of your role as an activist?

JC: I definitely think that my experiences in detention have changed my perception of my role as an activist because I experienced firsthand what it is to be detained and what people go through in an immigration detention center. Every time I hear someone talk about the horrible conditions they were in while detained, it really breaks my heart because it means that nothing has changed. The conditions in which all immigration detainees are kept in are the same horrible conditions I was in almost three years ago. So for all these reasons, my support for comprehensive immigration reform grows every day.

LT: Earlier this year, your story was documented by journalist Ryan Schill in a graphic novel. How did this idea get started? What response did you receive from the project?

JC: My story was documented by journalist Ryan Schill in a graphic novel. The idea came from a Kennesaw State University professor who is in the Communications Department. I met this professor at an event. He contacted me and asked me if we could work together on this project. I thought it was a great idea and that is how we ended up working on this project.

LT: How do you think national media coverage of cases like yours has progressed with the DREAM Act and the general movement for comprehensive immigration reform?

JC: I think that national media coverage of cases like mine has somewhat progressed with the DREAM Act and general movement for comprehensive immigration reform because it brings real stories to life and becomes part of history. When a real story is presented to the public in a way that conveys real struggles, people are most likely to be moved and get to know what it is be undocumented in this country.

LT: Earlier this month, the charges against you were dropped after more than two years. How did you feel when you finally heard the news?

JC: When I finally heard the news, I felt very glad and blessed that my odyssey was over forever. It is such a relief to have a normal life again, a normal life that includes not having to go to a courtroom at least once a month.

LT: You’ve said that immigration reform is fundamentally a human rights issue. Why do you think that?

JC: I think that immigration reform is fundamentally a human rights issue because we are talking about human beings who deserve to be treated as equals regardless of nationality, place of residence, sex, national origin, color, religion, or any other status. Our immigration system is completely outdated and beyond broken and that is why it is absolutely necessary to fight for this fundamental human right. These people are only fighting for the right to a path to citizenship, a path that allows people, Americans at heart, to be fully integrated to our society.

LT: What plans do you have for the future?

JC: I truly believe in dreams so I am a dreamer by nature. With this being said, I dream and plan on going to go to law school and being an immigration attorney one day.