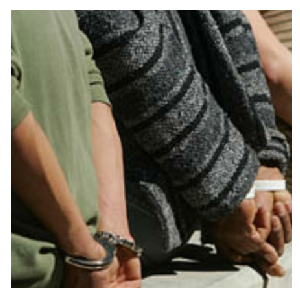 Today, we’re fortunate to have Piper Madison, a Presbyterian Young Adult Volunteer, visit our Washington, D.C. office to lead a brown bag discussion on the U.S. immigration detention system. She shared some of her experiences and motivations in an email interview with LIRS Media Relations Specialist, Clarissa Perkins.

Clarissa Perkins (CP): How did you become interested in immigration and detention?

Piper Madison (PM): When I was applying for my first year as a Young Adult Volunteer, Alabama had just passed some terrible immigration legislation and I felt called to use my year of service to people affected by similar racist policies.  I was pretty clear that I wanted to work with immigrants, not immigration, but I ended up working in criminal justice and prison reform.  Immigration detention is the nexus of where so many negative trends in US American politics meet – racism, classism, nationalism, mass incarceration, criminalization, privatization – and became a huge part of my time working at Grassroots Leadership.

CP: You just finished a year of service as a Presbyterian Young Adult Volunteer with Grassroots Leadership in Texas, a member organization of the Detention Watch Network. What was a highlight from your year?

PM: We had so many victories last year that it’s hard to count!  Not even two months after I started, we helped prevent the privatization of a forensic mental health hospital in Texas; the next month, our report on the Polk County Detention Center came out and got some amazing coverage; in February, we launched a very successful media campaign against GEO Group when they tried to buy the naming rights to a football stadium; we released a giant report for Correction Corporation of America’s 30th anniversary and held a protest in Nashville; and helped close two CCA-run state jails in Texas at the end of the legislative session.

My personal highlight was organizing and filing years of documents, including thousands of pages of Public Information Requests.

CP: What surprised you most?

PM: I didn’t know anything about private prisons or immigrant detention before I started at Grassroots Leadership.  I was aware of the serious racial disparities in this country, but the deeper I got in my research, the more horrifying the situation became.  The US incarcerates more people, at a higher rate, than anywhere else in the world, and the burden falls overwhelmingly on people of color.  African Americans have been the target of US criminalization and incarceration policies for decades, but as the vitriol against immigrants increases, Latina/os are making up more and more of the population of US prisons.

What I think shocks most people is that immigration offenses are civil, not criminal offenses – akin to reusing a stamp or parking to close to a stop sign.  It’s why the terms “illegal immigrant” and “criminal alien” are so misleading and harmful.

CP: Can you tell us a little bit about immigration detention and why it is harmful?

PM: Immigrant detention is the practice of incarcerating people suspected of immigration offenses like unauthorized entry or invalid documentation (like and overstayed visa).  The Department of Homeland Security is allocated funds for 34,000 detention beds, which it has interpreted as a mandate to imprison that many immigrants at all times; as a result, ICE [US Immigration and Customs Enforcement] and the US Marshal Services are implicitly, sometimes explicitly, encouraged to wrongfully imprison thousands of people a day.

There are a two things that are the most concerning to me.  First of all, the United States detains asylum seekers (people seeking refugee status in the US who were not able to apply in their country of origin and are applying on US soil), which is a clear violation of the UN Declaration of Human Rights.  These people have experienced grave violence at the hands of gangs, domestic partners, families, and even their own states, and are met with hostility in the country they’re asking for help.  I have had the opportunity to meet members of the Torture Abolitionists and Survivors Support Coalition [TASSC] and women detained at the Hutto Detention Center and hear their stories – women who would be killed by a gang if she returned to Guatemala or a husband if she returned to Honduras, men fleeing systemic violence in Ethiopia, and a man facing death threats for assisting the US military in Afghanistan.  A man from TASSC told me that being imprisoned at detention center in Pearsall, Texas was as bad as being tortured in his home country.

Second, the detention system is a creation of the prison-industrial complex. Nearly half of detention beds are run by companies like GEO Group and Corrections Corporation of America, which have a long history of human rights abuses and profiting from human suffering.  There are 6,400 for-profit detention beds in Texas alone.

PM: The purpose of the visitation program to the Hutto Detention center outside Austin is the break the isolation of detention, serve as human rights observers, and create advocates for humane immigration reform.  I think a lot of visitors want to show the people in detention that at least some folks in the US really value them and will fight for them.

CP: What can volunteers expect when they visit detainees and how can they prepare for visits?

PM: Visiting people in detention can be overwhelming and heartbreaking.  When visitors go through orientation for the Hutto Visitation Program, they learn about the immigration and detention system and the situations many of the women at Hutto are coming from, but nothing really prepares you for hearing their stories firsthand.  What’s really important for a visitor is to be first and foremost a good listener.

CP: How do you deal with pushback you might encounter on immigration reform?

PM: I try very hard to see everyone through the eyes of God.  It’s easy to do with migrants and incarcerated people that way but very difficult when I come up against folks with racist, nationalist, or anti-immigrant beliefs.  Most of the time, those people just don’t know much about it.  If I can’t provide them with information, I just stick to praying for them.

CP: You are starting a new position with Texas Impact. What are you most looking forward to?

PM: Texas Impact is the oldest and largest interfaith network in Texas, and it’s truly interfaith.  I get to work side-by-side with people who have wholly different religious beliefs than I do, but who are equally committed to social justice and serving the children of God.

Plus I have an awesome title – “Associate Policy Analyst for Criminal Justice and Immigration.

All are invited to Piper’s brown bag today! For more information, please email Julia Coffin at jcoffin@lirs.org or call 410-230-2775.