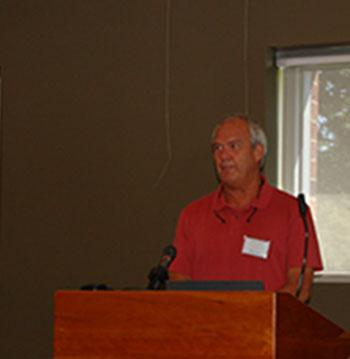 On this blog, I try to share both my thoughts and those of others standing for welcome at LIRS and nationwide.  Today, I’d like to introduce an interview by Luke Telander, Program Associate for Outreach at LIRS, with Steve Klemz, Pastor of Zion Lutheran Church in Salt Lake City.

The call to show hospitality to strangers is a common thread in most of the world’s religions, and it is no surprise that a wide variety of faith leaders and communities have followed their own scriptural call to stand for welcome and have come together to advocate for immigration reform.  Christians need look no further than Mark 25:35, “For I was a Stranger and You Welcomed Me,” to find inspiration to support legislation that is welcoming and just.

For Rev. Steve Klemz, his commitment to fair and humane immigration reform is both spiritual and personal, as his wife has been facing possible removal for over 10 years.   He is an exceptionally strong advocate for immigrants rights who finds that “hospitality is the heartbeat” of his faith and ministry.  Here are his thoughts on his faith, work, and immigration reform:

Luke Telander (LT): What experiences have driven you to stand for welcoming migrants and refugees?

Rev. Steve Klemz (SK): The Spirit has crafted a world of experiences for me, putting me in places where I have been the foreigner or stranger in need of hospitality.  My first call was with an African American parish in north St. Louis.  In St. Paul I served as the associate pastor for outreach, connecting the congregation with the Iringa Diocese in Tanzania, resettlement with three refugees from Ethiopia, connecting with the poor through Loaves and Fishes, Too.  Now I am in Salt Lake City, where it really means something to be a Lutheran within the predominant culture.  Through all of these experiences I have caught a glimpse of what it mean to accompany, or walk together, practicing the giving and receiving of hospitality.  All of these experiences helped give me the voice to stand for welcome, even when it means standing in the face of all the forces that diminish life, ranging from ranging from poverty to racism.

As the national immigration debate emerged, I was especially taken aback at the hostile, dehumanizing, and vitriolic rhetoric that characterized migrants.  As ICE raids increased, tearing families apart through detention or deportation, how could I, or the church, remain silent?  I also became increasingly unsettled about the direction of my country.  I believe that immigration, refugee, and asylum policies express who we are as a nation and influence the very character of our nation.

LT: How does your faith inspire your commitment to immigrant rights?

SK: Hospitality is the heartbeat of my faith and ministry.  I understand hospitality to practice of accepting all people as sisters and brothers created and beloved by God.  As I get caught up in the practice of hospitality, I find myself on the receiving end of God’s holy surprise.  When hospitality is extended to the stranger, we discover God’s presence and God’s blessing.  Biblical stories of Abraham welcoming the three strangers, the disciples’ walk with Jesus on the Road to Emmaus, and the parable in Matthew 25 are among my favorites … “Lord, when did we see you………?”

The Brazilian theologian Carlos Mesters says that we do theology depending on where our feet are standing.  I believe that the church that stands for welcome and extends hospitality to the stranger will always be a church renewed.   As we walk with the refugee, the immigrant, the newcomer, and the oppressed, we will find God’s presence and God’s blessing.

Of course, it is not only my faith but also my community of faith, which inspires my commitment to immigrant rights.  The writer of Hebrews describes this community as a “great cloud of witnesses.”  I am blessed to have LIRS in that cloud.   The website resources and updates are invaluable.  I love the support I receive from the staff, responding to questions or sending words of encouragement.  In fact, I believe that LIRS is the moral compass of the Evangelical Lutheran Church in America.

LT: Recently, you were involved in “Hope with Immigrants,” an interfaith service of reflection on immigration.  How have you seen interfaith efforts add to the discussion around immigration reform?

So it is with interfaith shared interfaith efforts.  Instead of discussing what it means to be in relationship with other faith communities, we have acted our way into a new community with our shared traditions and stories, revealing God’s love for people who live in the shadows.  I have been blessed to grow in friendship and now count it a privilege to claim friends in the Roman Catholic Diocese, the Imam from the Muslim Society, my Rabbi, Greek Orthodox priest, American Baptist, Methodist, and Episcopal Diocese.  As we stand for welcome with immigration reform, we catch a glimpse of God’s kingdom where people come to God’s banquet table of love, from the north and south, east and west.  Pretty amazing.

LT: As a resident of Utah, how have you seen America’s changing demographics fuel the political and religious debate around immigration?

SK: I love being a pastor in Utah.  In Utah, religion is the topic of conversation every day.  I only hope that the day is coming when the Church of Jesus Christ of Latter Day Saints publicly supports legislation that honors the sanctity of families through immigration reform.

As Martin Luther King said, “The arc of the moral universe is long but it bends toward justice.”  This is true even for Utah.  For the first time in a long time, the Utah State Legislature did not enact any punitive anti-immigration laws.

LT: What has been your greatest challenge as an immigrant advocate?

SK: My greatest frustration has to do with my own story.  My wife and I have been in U.S. Immigration Court twice in the last 11 years.  At the risk of facing removal, we sought relief through adjustment of status, which has been twice denied.  We remain in “administrative hold.” As you might expect, local media have followed our story as has my congregation, family and friends.  While all are sympathetic to our plight, it is frustrating that people do not see our situation systematically and become involved in immigration reform. We are not an isolated story.

My greatest challenge is fear.  When I get caught up in fear, I become anxious and angry.  Fear does not allow me to see possibilities.  I become self-absorbed.  I resist taking risks.  I believe that fear is the opposite of faith.  Faith believes that God is working with us, opening possibilities, and moves us to risk taking a stand.

As I speak or write about immigration reform, I ask Christians to reframe the issue, as a matter of fear or faith.  Fear sees the person who entered this country without authorization as an “illegal.”  A person of faith sees the immigrant without documents as neighbor, a fellow brother or sister who is created and loved by God.  Fear closes hearts and minds and possibilities.  Faith opens hearts and minds and possibilities.  Fear settles for simple answers to complex questions, i.e. “we are a nation of laws” or “enforcement only” strategies to immigration reform.  I prefer the statement of faith, offered by Archbishop Desmond Tutu, “Love is more demanding than the law.”

LT: What makes you the most hopeful for the possibility of real positive immigration reform?

I believe that our stories of hope make a difference.  When Jesus sent us to bring God’s to make disciples, he began with the promise, “All authority in heaven and earth is given to me.  Go …..”  I like to think of the word “author” derived from this authority.  As we share our stories of hope, we are also sharing God’s story, who is writing the story with us.

LT: What are you planning for the future?

SK: I will continue to show up in the offices of my representatives and senators.  I will show up for prayer vigils and on the pages of op-eds.  I will become more of an organizer, inviting more faith leaders to explore what it means to stand for welcome.  I will be faithful to my call to proclaim grace, which comes alive in the hospitality extended and shared with the newcomer and stranger.  I will become more intentional in prayer.