Immigration Reform 2013: Rev. Wilker Stands for Welcome in the Shadow of Capitol Hill 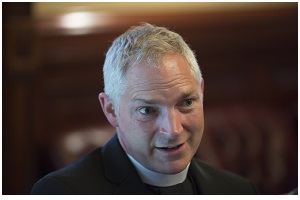 On this blog, I try to share both my own thoughts and those of others standing for welcome at LIRS and nationwide.  Today, I’d like to introduce an interview by Luke Telander, Program Associate for Outreach at LIRS with Rev. Michael Wilker, Senior Pastor at Lutheran Church of the Reformation in Washington, D.C.

Religious voices have emerged as some of the strongest forces during this year’s immigration reform push, as groups like the Evangelical Immigration Table and Interfaith Immigration Coalition have exerted a great deal of influence in the debate.  Last week, 40 Lutheran leaders descended on Capitol Hill from all over the nation to advocate for immigration reform, living out their faith and standing for welcome as they met with members of over 100 Congressional offices. Among the participants was Rev. Michael Wilker, who serves the diverse congregation of Lutheran Church of the Reformation. The church is literally in the shadow of Capitol Hill and has been an active member of the Hill community for over 140 years.  I was lucky enough to catch up with him via email for an interview.  Here are his thoughts:

Luke Telander (LT): What first drove you to become involved in advocating for immigrants and refugees?

Rev. Michael Wilker (MW): I lived in Washington, DC, during the late 1980’s and the civil wars in El Salvador and Guatemala.  I learned from Central American refugees the difficulties they faced seeking sanctuary and refuge in the US.  I also saw how difficult life was for immigrants and how hard they worked for their families and the church.  They were my inspiration to attend seminary to train to be a bilingual pastor.  My first two parishes in Watsonville, CA and Freeport, NY, were bilingual congregations with immigrants from Mexico, El Salvador, Dominican Republic and as well as Europe.  So, what drives me to advocate with immigrants and refugees is ultimately the Holy Spirit calling through God’s people.

LT: How does ministering in the shadow of Capitol Hill color your work as you stand for the welcome of migrants and refugees?

MW: As a Lutheran, I see the symbols of government as signs of God’s call to social justice and peace, as well as signs of sinful human pride.  The US Capitol is a beautiful symbol of our precious democracy and freedom—and it’s a symbol of centralized social power. Our congregation welcomes many visitors, including immigrants and refugees, from across the nation and world.  They come to Washington because they aspire to share in our nation’s work for “life, liberty and the pursuit of happiness.”  And they also recognize that centralized power marginalizes and abuses many people.  Immigrants and refugees, like our congregation, trust God’s Spirit is constantly with us to reform church and society.

LT: How have you seen immigrants and refugees contribute to and strengthen their communities?

LT: What has the atmosphere on Capitol Hill been like around the immigration reform debate?

MW: The US Congress is in dire straits because it embodies the serious political divisions and failures in the nation.  The voters don’t trust one another, so they have elected Representatives and Senators who have very little trust and incentive to work together.  This means that Congress is failing to take many actions to improve our nation.  It’s very sad and frustrating, but it won’t get better until voters across the nation improve their trust and relationships.  Congress reflects the people, truly.

In this current national context, immigration reform, like every bit of federal legislation, will be very difficult to pass, if at all.  But because so many people across the nation recognize our current system’s failures and abuses of refugees and immigrants and how the current system weakens our nation and betrays God’s call to the US to be a nation of justice and mercy, there is some hope that we will be able to overcome our national divisions to make the US better, stronger and healthier.

LT: What is the number one thing congregations in Washington, D.C. and around the country can do over the next few months as an immigration reform bill moves towards a vote?

MW: The four most important things to do in the next few months.  One, go listen to immigrants and refugees in your community.  Two, find out if your representative and senators support the Lutheran call for comprehensive immigration reform. If they don’t ask them to.  If they do, thank them.  Three, talk with or email 10 of your local friends or congregational members to join in in #1 and #2.  Four, ask your friends in other parts of the nation, especially North and South Carolina, Texas and Arizona to join you, too.