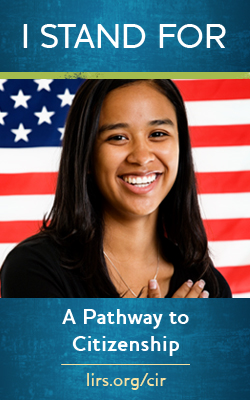 LIRS has carefully considered how S.744 would impact our five principles for reform. Details of our analysis are available now on our website, and we are releasing the analyses on our blog over the course of this week. Today, we take an in-depth look at the creation of a roadmap to citizenship for undocumented immigrants. See also our analyses for family-based immigration, refugees and other vulnerable migrants, detention and access to justice, and detention.

Comprehensive immigration reform that allows undocumented immigrants to fully contribute to our families and communities honors America’s history as a nation of immigrants and the biblical call to welcome the stranger. LIRS therefore applauds the April 17, 2013 introduction of S. 744 (The Border Security, Economic Opportunity, and Immigration Modernization Act). The bipartisan bill establishes a roadmap to citizenship for undocumented immigrants and welcomes new Americans through the following provisions:

LIRS is concerned that criteria to achieve and maintain lawful status may pose significant challenges. For example, those using the roadmap to citizenship would be excluded from federal public benefit programs including food stamps and affordable health care. Requirements must not outweigh an otherwise accessible and fair legalization process. Below are provisions of concern to LIRS:

You can keep tabs on the latest immigration reform developments by reading our Monday updates from Hill experts.