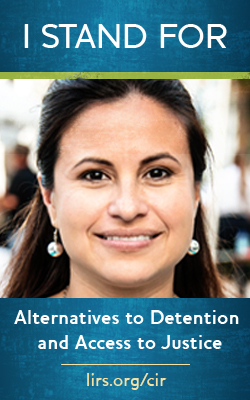 LIRS has carefully considered how S.744 would impact our five principles for reform. Details of our analysis are available now on our website, and we are releasing the analyses on our blog over the course of this week. Today, we take an in-depth look at detention and related issues.

Our immigration law must be humanely and justly enforced. LIRS  has long urged Congress to achieve this goal by reducing America’s use of immigration detention, which often involves arbitrary, prolonged loss of liberty and is a barrier to full, fair, and just court proceedings. We also advocate expanding community-based alternatives to detention programs that provide legal, housing, medical, mental health, and other services as needed.

LIRS therefore applauds the April 17, 2013 introduction of S.744 (The Border Security, Economic Opportunity, and Immigration Modernization Act) in the Senate. The bipartisan bill contains the following positive changes for migrants held in immigration detention, the operations of detention facilities, and the use of alternatives to detention:

Throughout the legislative process, lawmakers will be listening for voices from their constituents. It’s critical that they hear from you and everyone who stands for welcome for migrants and refugees. This is a moment of opportunity to encourage Congress to provide a roadmap to citizenship for undocumented immigrants and their families, ensure humane and just enforcement of our immigration laws, uphold family unity for migrants and refugees, improve our refugee and asylum processes, and protect U.S. citizen and migrant workers. Visit our Action Center and tell your representatives in Congress that you support humane enforcement in immigration reform.