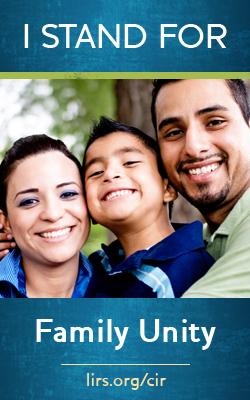 Here at LIRS, we’ve spent the past 10 days analyzing the immigration reform legislation that the bipartisan “Gang of Eight” released on April 17.  This bill, known as S.744 or the Border Security, Economic Opportunity, and Immigration Modernization Act, would overhaul our current immigration system.  It includes numerous improvements to our immigration laws that would benefit migrants, refugees, their families and communities, and our nation.  LIRS applauds these improvements, but also decries changes made by the legislation that would divide some immigrant families.

S.744 is far from becoming law.  Proposed changes by senators on the Judiciary Committee will be voted on during a series of hearings in the month of May.  Next, the amended bill will move to the floor of the Senate where it will be subjected to additional debate and voting.  Finally, S.744 must either be adopted by the House of Representatives or be reconciled with any competing immigration reforms put forward by that chamber.

LIRS has carefully considered how S.744 would impact our five principles for reform. Details of our analysis are available now on our website, and we are releasing the analyses on our blog over the course of this week. Today, we take an in-depth look at family unity.

Family unity is a core American value, and for decades Lutheran Immigration and Refugee Service (LIRS) has advocated for an immigration system that reunites and keeps intact migrant and refugee families instead of dividing them. Therefore, LIRS has a mixed reaction to how immigrant families are treated in S.744 (The Border Security, Economic Opportunity, and Immigration Modernization Act), introduced April 17, 2013 in the Senate.

LIRS applauds numerous improvements in S.744 that would strengthen family unity and enable migrants and refugees to reunite with loved ones in the United States. The bipartisan bill makes the following improvements to our family-based immigration system:

Throughout the legislative process, lawmakers will be listening for voices from their constituents.  It’s critical that they hear from you and everyone who stands for welcome for migrants and refugees.  This is a moment of opportunity to encourage Congress to provide a roadmap to citizenship for undocumented immigrants and their families, ensure humane and just enforcement of our immigration laws, uphold family unity for migrants and refugees, improve our refugee and asylum processes, and protect U.S. citizen and migrant workers. Visit our Action Center and tell your members of Congress that you support family unity in immigration reform. You can also keep tabs on the latest immigration reform developments by reading our Monday updates by Hill experts.