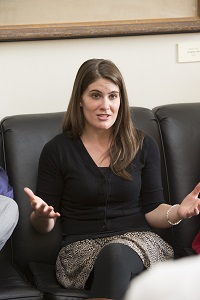 Through this blog, I have the opportunity not only to share my voice, but also to lift up the voices of others standing for welcome at LIRS and throughout the nation.  Today, I’d like to introduce an interview by Luke Telander, Program Associate for Outreach at LIRS. He speaks with Sarah Jackson, founder and Executive Director of Casa de Paz in Denver.

Now more than ever before, Congress needs to hear the stories of the millions of people suffering from our broken immigration system.  They need to hear about the families torn apart by detention every day. Far too often, however, these people have difficulty making their voices heard.  That’s why it’s so important that strong advocates such as Sarah Jackson are standing for welcome and traveling to Capitol Hill to share these families’ stories.  She, along with some 40 other Lutheran leaders, participated in the 2013 Lutheran Immigration Leadership Summit, meeting with over 100 Congressional offices to share their experiences and advocate for fair and humane reform.  We were lucky enough to speak with her via email about the event.  Here are her thoughts:

Luke Telander (LT): Why did you decide to participate in this year’s summit?

Sarah Jackson (SJ): Any time I have the opportunity to surround myself with incredible people who have a heart for the immigrant and refugee community, I do! It’s a powerful time to meet others, hear the work they’re doing, and get energized. Plus, we were given the chance to speak with senators and representatives from our local community and let them know why immigration reform is so important and critical. I believe it speaks volumes when we can bring stories from members of our cities to Washington D.C. so our leaders get a real insight into what’s happening in their districts each and every day.

LT: What experiences at Casa de Paz were you able to share during the hill visits?

SJ: Every week we host guests whose families are torn apart by our out-dated and broken immigration policies. One family in particular stood out, though. Imagine spending Christmas Eve separated from your husband or dad. Well, this family lived through that nightmare, and unless something changes soon, he might still be in detention next Christmas Eve, too. The three girls, sitting in their living room, asking questions about how their dad was… the mom, wanting to know how her husband was handling being away from his family for so long. And the dad, waiting, waiting, waiting in detention. His crime? Driving with a broken windshield.

This family, sadly, is not uncommon in Colorado. It happens far too often. And, hopefully sharing this story will help remind our representatives how important it is to pass some type of pathway to citizenship which puts families back together again – right where they should be.

LT: What is the main message you wanted to get across?

SJ: There are committed, hard-working, contributing moms, dads, kids, grandmas, grandpas, uncles, aunts, you get the point… just normal people living in our city. They are Americans without papers, who deserve a chance to live as fully thriving members in our community. We need to find a solution which gives them a chance to obtain papers, connect back with family, and also this should be extended towards the asylum seekers and refugees. We must not forget about them.

LT: What part of the event gave you the most hope?

SJ: It was encouraging when LIRS came out with their official stance on the bill. Even though it doesn’t include everything we hoped for, it is a good starting point. And, in order to make any kind of dent into this dysfunctional system, we need to start somewhere. Is it perfect? No. Is it something headed in the right direction? Yes.

Also, it was the first time I’ve ever met with my senators and representatives. I was terribly intimidated to visit with them because I thought it would be them interrogating me with questions I had no answers to. However, this was so different. All I did was share what I was seeing every day and why it’s so important to me to see some type of change take effect. I’m hoping to encourage my friends to come along on my following trips to my local representatives.

LT: Why do you think 2013 will be the year of real immigration reform?

SJ: I believe many different groups of people have been working very hard for years to push immigration reform through. But this year is different. It seems like all the reasons to overhaul our system are lining up.

If you would like to raise your voice for immigration reform that benefits the families talked about in this interview, please visit the LIRS Action Center now! Also, check out our weekly updates to learn the latest progress on immigration reform from Capitol Hill insiders.