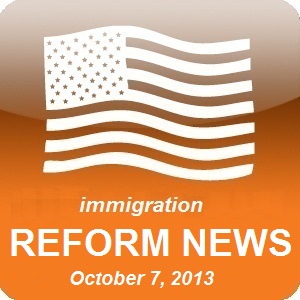 Immigration reform news is vital to anyone trying to answer the burning question we’ve been examining for months: Will we see a real legislative solution this year?

“Immigration Reform News,” a weekly blog series, continues The Update’s tradition of  a panel of experts who’ll analyze how recent events affect the prospects for real reform. They offer an insider’s view of what’s happening right now on Capitol Hill, informed by their decades of experience with immigration reform and the legislative process.

Over the weekend, thousands of people rallied for immigration reform and a path to citizenship, showing once again that the need, the passion, and the support for immigration reform is real.  And in the midst of the government shut down, Democrats introduced a modified version of the Senate immigration bill, one that eliminates the  exorbitant provisions of the border surge Corker-Hoeven Amendment, and replaces it with a bipartisan House bill on border security.  This is significant, for although HR 15 started with only Democrats as co-sponsors, there is high hope that some of the Republicans who have supported a path to citizenship will recognize that this is a bill whose substance is bipartisan—drafted by Republicans and Democrats, passed in the Senate by Republicans and Democrats, and, for the border portion, passed unanimously out of committee by Republicans and Democrats.  If a few Republicans join as co-sponsors, some hope it may help to break the logjam on immigration, opening up the space for a more substantive dialogue and exchange of ideas.  Regardless of whether Republicans join on this bill, however, H.R. 15 does serve the purpose of keeping immigration in the forefront of the tiny space reserved among House lawmakers for items unrelated to the government shutdown. It also demonstrates that people can think creatively about how to meld different bills to come up with something new.  There is plenty of material to work from, and each new bill put into the mix is offering more vehicles for debate and resolution.

Washington is in chaos and the whole nation is watching. For the past few weeks, four words have dominated cable news cycles and legislators’ thinking: “Government Shutdown” and “Debt Ceiling.”  Political antics are needlessly pushing our nation to the brink of fiscal destruction while we have real problems that need to be solved. We need to pass a fair and just budget, and we also need to fix our nation’s broken immigration system. Even with the public battle over the budget, there is reason to hope. Politico recently wrote that President Obama is planning a fall push on immigration reform, and House Democrats have introduced new immigration legislation. Given the moral urgency and economic need to act, both parties must remain invested in this issue. The latest round of economic brinksmanship is not only fiscally irresponsible, but every day that Congress wages this unnecessary internal battle the economy and immigrant communities and families suffer under the weight of the status quo. The people elected their legislators to lead, not to chase cable news cycles. Leadership requires the courage to do the right thing for the common good. It is time to stop worrying about photo-ops and start focusing on the suffering of people. Let’s get these fiscal issues behind us and pass common sense immigration reform.

As people of faith, we bear witness that, even as members of the House contemplate next steps, our unjust and unhelpful immigration laws are causing migrants and refugees to die in attempted border-crossings, endure imprisonment, suffer separation of families, and face deportation at alarming rates. Migrants and refugees and their supporters, including persons of faith, are moving onward toward reform of our broken immigration system. Over the weekend over 160 rallies in support of immigration reform were planned nationwide. The human and economic costs are too high to let the current congressional malaise slow the momentum for fair and compassionate reform.

Although the federal government shut down last week after Congress failed to agree on how to fund government agencies and services, rays of hope on immigration reform broke through the otherwise gloomy D.C. political scene.  More than 120 members of the House of Representatives added their names to an immigration reform bill introduced in the House on Wednesday.  The bill, known as H.R.15, is drawn from the commonsense immigration reform package debated and passed by the Senate in June.  While not without some shortcomings, this bill would bring the United States closer to a set of immigration laws that are fair, compassionate, and welcoming to migrants and refugees. The pressing question now is whether the House will move forward with a vote on this bill or the several other, smaller immigration bills now pending in the House of Representatives.

“Immigration Reform News” will appear every Monday until the dust settles on the legislative battle over comprehensive immigration reform. If you wish to raise your voice for fair reform, please visit our Action Center. You can also learn more about the issues by reading an interview with someone personally impacted by America’s broken immigration system, Jessica Colotl. Also, don’t forget that you can subscribe to this blog by adding your email address to the box at the top left of this page!