Border Trip 2018: Inside the Icebox

At the end of September, LIRS led a mission to Tucson, AZ to bear witness to the conditions of detention centers and immigration facilities housing children and individuals.  The following story is part of a five-part series we’re calling”Border Trip 2018” — a firsthand account written by Pastor Clint Schnekloth, Board Chair of Canopy Northwest Arkansas. To read the series in its entirety, you can go here.

Our first destination for the border trip is Eloy Detention Center (you can watch a video tour of the detention center). Many immigrants call Eloy The Icebox (hielera) because it is so consistently cold inside. It’s about an hour drive out of Tucson to Eloy. The setting is stark, 100-degree temperatures by mid-morning under an unrelenting sun, with the Catalina mountains as backdrop and frame. Next to the welcome sign for the center is a large cactus.

This is not my first visit to an immigration detention center. Ever since one of my parishioners was apprehended by ICE here in Arkansas back in 2017, I have been visiting him at LaSalle Detention Center in Louisiana. I make the seven-hour drive once every three months or so, spend an hour visit with him, then drive home. Yes, that’s right. It takes me 14 hours to visit my parishioner, who until his detainment by ICE was one of our lectors, attended our weekly bible study, and contributed much to the vitality of our community and congregation. 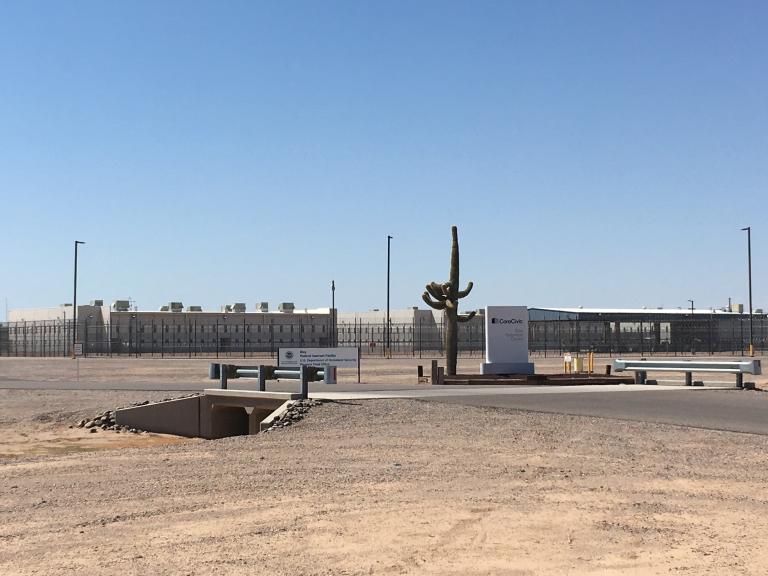 Eloy is actually two enormous buildings set side by side, rising out of the desert landscape like cardboard boxes. The first is a higher security prison facility, housing criminal inmates. The second is the immigration detention center.

When you pull into the parking lot, a white pickup drives up almost immediately and drives parallel to the van, an observation and security truck that monitors all activity in the parking lot. We park our van, then empty our pockets of everything. No belts, no jewelry, no wallets, no phones, no metal of any kind. Not even pen and paper are allowed. Just our clothes and our state issued ID (driver’s license).

You enter Eloy through a series of security gates. Each gate is a metal cage door surrounded by barbed wire. After this double buzzed entry, you come to the “lobby.” Already you feel the shocking cold, as the air goes from 100 degrees outside to under 70 inside.

At the lobby, we fill out visitor paperwork for a background check. Make a mistake on the form, you are required to discard the form and start over. It took me three tries to complete an accurate form front to back.

While we are completing these forms, we find out there was a miscommunication on the detention center pod schedule, so three of the four detainees we were going to visit are no longer available because they have switched pods. Doing a quick shuffle, we still get four of us in to visit one of the detainees.

Forms completed, we step through the metal detector and wait in the second lobby.

While we wait, we witness a sad event. A family arrives intending to visit their loved one.

But like us, they learn there has been a shake-up in pod assignments, so their family member is no longer available to meet with them at the visit time for which they’d arrived.

The bigger problem for this family: they’d driven over six hours one way to make the visit. The lobby guard, never looking up from her papers, says, “You’ll just have to come back next weekend and try again.”

When we talk with the lobby guards, they are harried but unflappable. They’re here day after day shuffling a wide range of visitors through security.

The guard explains that there have been significant shake-ups in their systems because of the overall expansion of the detention system. Some detainees are now also housed over at the higher security criminal building because they’ve run out of beds in the main immigration detention facility. The result is considerable confusion of schedules. “So just always call us at the lobby to confirm your visit.”

We wait in the second lobby and watch cartoons with some children waiting to visit their parents. Finally, we’re admitted into the visitation room itself. This room is full of crude plastic tables modified with plywood barriers to prevent contact between detainees and visitors. Somehow the barriers are supposed to keep detainees and visitors from passing items to each other though it’s unclear how this helps much, or why such contraband wouldn’t be noticed during the very thorough metal detector and pat-down check that happens upon entry.

What it does do is isolate detainees even more from their families. Whereas in the past children could visit and sit in the lap of their parent, now with the barriers and the requirement to sit on opposite sides of the table, very little touching or contact can occur other than the initial hugs that happen at arrival and leave-taking.

Our detainee/friend arrived in the United States about one year ago from El Salvador. Once across the border, she was abandoned by those facilitating her entry. Caught in the middle of a storm and left on a mountain hillside, she was afraid she would get hypothermia and so walked to the nearest town where she was detained by ICE.

We learn right away that this week has been especially hard for her. She’s depressed and having trouble getting out of bed each day. She was recently separated from a friend in her pod because the guards perceived their relationship as too “sentimental.” Apparently, it is a regular practice to separate detainees who become emotionally close.

Our detainee may identify as a lesbian so she is targeted even more than other detainees. But such separation from a friend based on subjective observations by the guards results in her not wanting to form any new relationships for fear she would get moved or separated again. It’s a traumatizing double-bind.

We are visiting Eloy together with Casa Mariposa, a non-profit out of Tucson that visits immigrants in detention, and also owns a transitional house for recently released detainees, especially members of the LGBTQ+ community.

Our new friend loves to read books. We talk and laugh about the terrible conclusion to a Nicholas Sparks novel she recently finished. She’d like more books, lots more books, especially novels and books for learning English.

She used to lift weights competitively in El Salvador. Her demeanor indicates a mix of embarrassment and pride at this.

We talk about how she spends her days. We learn she only gets to sleep from 9 p.m. to 2 a.m., because she works in the kitchen, and kitchen duty begins at 2 a.m. Detainees are not allowed to sleep during the day.

We learn she’d like to study medicine and become a doctor, or possibly, when she gets out, work in a field where she can help detainees by visiting them the way we visit her.

The hour goes quickly. The guard is not unkind, but he firmly tells us it is time to go. So we do, exchanging hugs on the way out the door.

We then return to our colleagues, who have waited in the outer lobby the whole hour, unable to visit anyone. Because “rules.”

We walk back out to the van, witness (at a distance, and across multiple barbed wire fences) hundreds of detained immigrants in the yard trying to have their “walking” time, which really means they are huddled under whatever shade they can find in the courtyard. The sun is blazing. We are in the middle of a desert, after all. 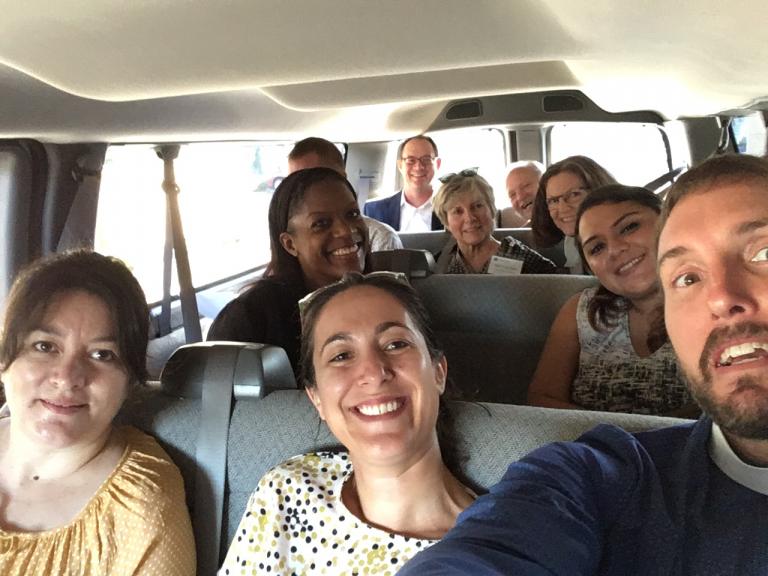 We take a group photo at the driveway entrance, near the sign. This feels like the most surreal of moments. What does it mean morally to observe and visit detainees in a place like this? Should the moment be recorded for posterity in such a photo?

As we drive back I keep remembering the families that came into the visitation room with us, many arriving with children in tow. Watching those children come in and give their parents such long hugs, realizing this had become normal to them, this separation from their parents, this Sunday morning visitation. The whole of it feels like communal, moral injury. It need not be like this, and so shouldn’t be.

And I kept remembering the reports I’d heard from the detainee and the translator, both of whom indicated that although conditions in the detention center weren’t horribly abusive (other than it being an icebox, being forced to work for $1 an hour, and being detained in the first place), they did mention that indigenous Guatemalans housed there also received a lot of verbal abuse from the guards. Because guards. Apparently, the guards become frustrated at the indigenous immigrants’ inability to speak Spanish.

The drive is long enough, I even begin to reminisce. Like that Talking Heads song, “And you may ask yourself, how did I get here?”

Next up in the series: The Scapegoat & The Desert Butterfly.