International Women’s Day: Violence Against Women Act Signing is Cause to Celebrate! 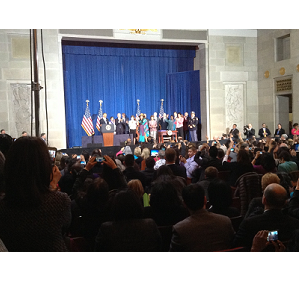 Yesterday, I celebrated your success in Washington, DC!

Thanks to you and many friends of LIRS, the Violence Against Women Act (VAWA) was signed in to law by President Obama—and the White House wanted LIRS to be present on the occasion.  (To the right is the snapshot I took—a little bit like a concert photo, but it gives you a sense of the ceremony.) I attended the signing of this life-saving legislation with LIRS Director for Advocacy Brittney Nystrom—but all of you who sent emails and letters to Members of Congress, made phone calls, told your own stories of violence experienced by women, wrote letters to the editor, and spoke directly with your elected officials were there with us too.

The enactment of VAWA will make a critical difference in the lives of thousands of women and men across the country who are victims of domestic violence, sexual assault, dating violence, and stalking.   This law is also a victory for immigrants and a positive sign that lawmakers from both parties can indeed act quickly. The bill includes improvements on protections for immigrant victims of violence that LIRS has long advocated for, along with further protections for children and victims of trafficking, which are hallmarks of LIRS’s advocacy and service.

Yesterday I was so proud to hear the president speak about just how important VAWA is for immigrant women when he said, “Today is about the women who come to Rosie Hidalgo looking for support — immigrants who are victims of domestic abuse.  I mean, imagine the dilemma for so many — if your immigration status is tied to a husband who beats you or abuses you, if you’re an undocumented immigrant, you may feel there’s too much to lose by coming forward.  The Violence Against Women Act already had protections so that victims could call the police without fear of deportation, and those protections saved lives.  And because we fought hard to keep them in place, they remain a lifeline for so many women.” 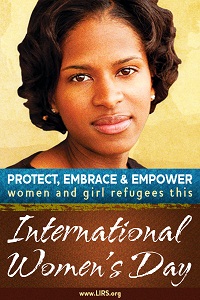 You have been a tireless advocate with LIRS for the protection, dignity and care for the victims of human trafficking.  One key component of the LIRS End Human Trafficking Campaign  are the legal protections of the Trafficking Victims Protection Act which was included in VAWA and received strong bipartisan support. Yet another victory!  On the stage with the president at yesterday’s signing was Tysheena “Tye” Rhames, of whom he spoke movingly, “Today is about young women like Tye, who was brought into the sex trade by a neighbor when she was 12 years old.  Tye was rescued with the help of an organization led by trafficking survivors.  Today, she’s enrolled in college.  She’s working full-time to help at-risk girls stay out of the sex trade.  Couldn’t be prouder of her.  So proud of her.  So with this bill, we reauthorize the Trafficking Victims Protection Act to help more girls turn out like Tye.”

Which brings us to today, International Women’s Day.

What could be a more perfect moment to celebrate a victory like VAWA, which holds so much meaning for so many women? Thank you for the stand you have taken for welcome and the lives it will save.  Women like Tye count on you.  Today they will be safer and they will be cared for as they overcome the trauma of violence and face their future with hope.