Join Us to Celebrate the Walk of Courage | LIRS
URGENT: Immigrant children and families affected by Hurricane Ian need your support! Donate now.
Skip to content

Join Us to Celebrate the Walk of Courage

Lutheran Immigration and Refugee Service walks alongside migrants and refugees on journeys that demand courage and hope. Their journeys require bravery in the face of the new and unknown, and call for faith in the promise of peace and opportunity.

There are those who have gone above and beyond in their service to refugees and migrants. The Walk of Courage Award Gala is an opportunity to celebrate those dedicated individuals. We come together to recognize Madeleine Albright and the Rev. Dr. Mark Hanson for their commitment to walking alongside and raising the voices of migrants and refugees.

Join us on October 26, 2016, as we present our annual Walk of Courage and Walk of Faith awards. 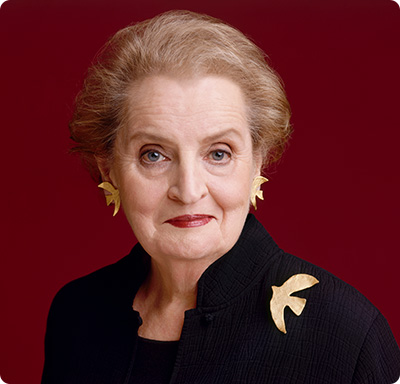 Former U.S. Secretary of State, Dr. Madeleine Albright, will be honored with the Walk of Courage Award for her outstanding career achievements and her lifetime commitment to furthering equality for all people. Born to Czech parents, she became the United States’ first female Secretary of State under President Bill Clinton in 1997, and has paved the way for both women and immigrants throughout her life.

Since leaving office, Albright has continued to be an advocate for world justice. She is the Founder and Chair of the Albright Stonebridge Group, a Washington, DC based global business strategy firm. Dr. Albright has received numerous prestigious awards, including the Presidential Medal of Freedom and the Distinguished Public Service Award. She currently serves on the boards of the Aspen Institute and the Center for American Progress.

The Rev. Mark S. Hanson, former presiding Bishop of the Evangelical Lutheran Church in America (ELCA), will also be recognized with the Walk of Faith Award for his career of service to the Lutheran community. The ELCA is the nation’s largest Lutheran denomination. Rev. Hanson was ordained in 1974 and has since served as a pastor for three Minnesota congregations, a Bishop of the Saint Paul Area Synod, and as the President of the Lutheran World Federation in Geneva. Rev. Hanson is a tireless advocate for migrants and refugees. He currently serves as the Executive Director of the Christensen Center for Vocation at Augsburg College.

Omar Al-muqdad is a Syrian journalist and documentary filmmaker who studied political science and international relations at the University of Damascus. He was imprisoned for two years for speaking out critically against the Syrian Assad regime. The newspaper he founded and reported for in Syria was shut down three times by Syrian security forces for publishing articles critical of the regime.

Since coming to the United States, Omar has written for international newspapers and appeared on news networks writing, speaking, and analyzing the Syrian civil war. He has done extensive reporting on the Syrian refugee crisis.

A former refugee, Joseph is now a police sergeant with the Metro Transit Police Department of Washington, D.C. He was resettled in the United States in 1999 after fleeing the Liberian civil war and is an alumnus of the LIRS Migrant and Refugee Leadership Academy.

Over the years, Joseph overcame many challenges as he adjusted to life in the United States. He was once homeless and slept on the streets of Washington D.C. He met a Lutheran pastor whose encouragement and support enabled him to go to university and work for the success he has had. He says, “I have dedicated my life to helping other refugees because others invested in me. My courage is built on the foundation that it is in striving that we honor the sacrifices of all those who believe it is worthy to invest in us.”

For additional information regarding tickets or sponsorship opportunities, visit the 2016 Gala website or call 410-230-2766.