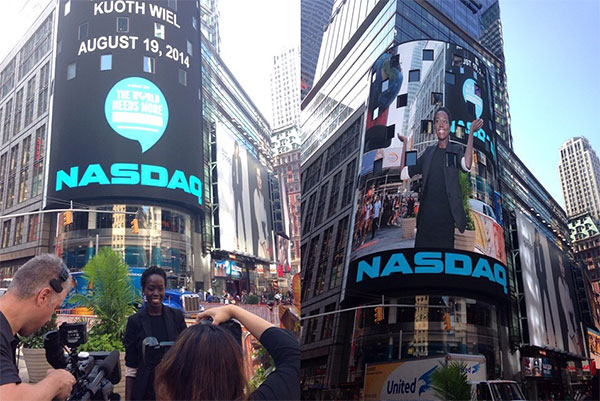 Today, I’m thrilled to share an interview with Kuoth Wiel, a former refugee who recently acted next to Reese Witherspoon in the upcoming movie, The Good Lie. When she was eight, Kuoth escaped the Sudanese civil war and landed in Minnesota with the help of LIRS and Lutheran Social Services of Minnesota. Kuoth attended Trinity Lutheran School and graduated from Augsburg College, a Lutheran school in Minnesota. This past summer, she participated in LIRS’s World Refugee Day Academy, where she honed her leadership skills and discussed key issues with representatives on Capitol Hill.

In this interview, Kuoth speaks to Erin Phelps, former LIRS Grassroots Mobilization Intern, on the difficulty of being separated from family, the power of faith, and how through acting, she gives a voice to refugees.

We moved back and forth from Ethiopia and Sudan and would often encounter atrocities that I wished I never saw. Hope was given to us when we found out that my oldest brother was alive and he wanted us to join him in the United States.

We all knew what tremendous impact it would have on us so we made a huge sacrifice to leave the only place we called home. We arrived in Minneapolis, MN and immediately became immersed in the American world.

Adjusting to our new surroundings was not easy; we often had to make mistakes in order to learn how to do it right. We had a lot of help from our church in Faribault, MN. Our faith kept us close to a lot of people who helped us resettle and what they have given to us is something we will forever carry with us.

EP: What has been your biggest challenge since your family resettled in the United States?
KW: Our biggest challenge since resettling is reconnecting with family left behind in Sudan and Ethiopia. My oldest sister is still in Ethiopia and she has not seen us for 16 years. It is hard to relocate family members to the United States and it keeps people so much apart. As a refugee it is a privilege to be in a new country but also a burden because you often have to leave your family behind.

EP: What did you learn during the World Refugee Day Academy? What have you taken back to your own community?
KW: I have learned so much that I was not aware of before going there. There is so much that needs to be done in terms of influencing legislation for resettlement programs and programs that benefit those who are immigrating to the United States.

I now know what to push for when it comes to advocating for refugees. I am going to pay more attention to the concerns of my community and develop efficient ways to make sure their problems and questions have been addressed.

EP: What have you been up to since the Academy?
KW: I have been talking with people in my community about the issues that are facing them so that I can better plan for how I am going to help them. I have also been working with organizations that are helping aid those in need in South Sudan.

EP: How did you get into the entertainment industry?
KW: It has always been a dream of mine to act, but I also have a love for Psychology. In the spring of 2013 I auditioned for The Good Lie and after several meetings I got the part of Abital Deng, a lost girl who was orphaned by the Sudanese civil war.

EP: Can you tell us a bit about your experience working on your new film? What did you gain from this experience?
KW: For me it was more than just a film because I was in a position to retell the story of my country. I wanted to honor my character and make sure that everything I did would bring her struggle into light. It was hard at times to relive such a tragic time in my life but it had to be done in order to educate others.

I have gained such a tremendous amount of knowledge about the industry and my talent as well.

EP: How does your work as an actress and model intersect with your interest in advocating for refugees? Are there any particular refugee-related issues that you are particularly concerned about?
KW: My work allows me to have a bigger audience. I am fortunate to be a refugee and to have escaped but may others do not get that chance. There are refugees around the world whose voices are not heard and I want to bridge that gap. We as humans share this earth and why should people be suffering if we can do something about it?

EP: How did you end up getting to ring the bell at the NASDAQ? What was that experience like for you?
KW: The United Nations was celebrating World Humanitarian Day (WHD) and NASDAQ wanted us to ring the bell that day to start off the day. It was a great opportunity and a great initiative because a lot of humanitarians do tremendous work that goes unnoticed so it was good to highlight it.

EP: What’s up next for you? What are your dreams for the future?
KW: The possibilities are endless. I want to focus on my career in acting but also do more work in advocating for refugees and human rights.