Taking the LIRS Leadership Academy Closer to the Ground

As part of our mission to stand with refugees and migrants, LIRS works to empower refugees and LIRS network partners to engage in advocacy on both local and national levels.

Each year, LIRS hosts the Migrant & Refugee Leadership Academy (MRLA), an event dedicated to equipping refugees and migrants with basic advocacy training, media training, and the tools to tell their own unique story. Participants come away from the event as “alumni” and go on to become leaders and advocates in their local communities.

This year, LIRS decided to develop the program further by bringing the MRLA closer to the ground by hosting a number of local, state-level events.

This approach served to engage Academy alumni leaders in new leadership roles, expand the reach of the MRLA to more migrants and refugees, and inspire grassroots action in communities across the country.

This year’s MRLA came together as state-level events in the key states of Georgia, New Hampshire, Texas, Ohio, and Nebraska.

These five events were led by 30 of our alumni leaders and collectively brought 148 new migrant and refugee leaders into the network which now comprises 297 refugee leaders in 39 states across the country and represents nearly 50 different countries of origin.

After identifying the states that were best suited to host an MRLA event; LIRS supported local MRLA leaders with a toolkit that shared key resources and strategies for community organizing; we provided connections to high-profile keynote speakers; and, of course, we provided grants to fund the events.

The following are highlights from each state-level training and advocacy day events. 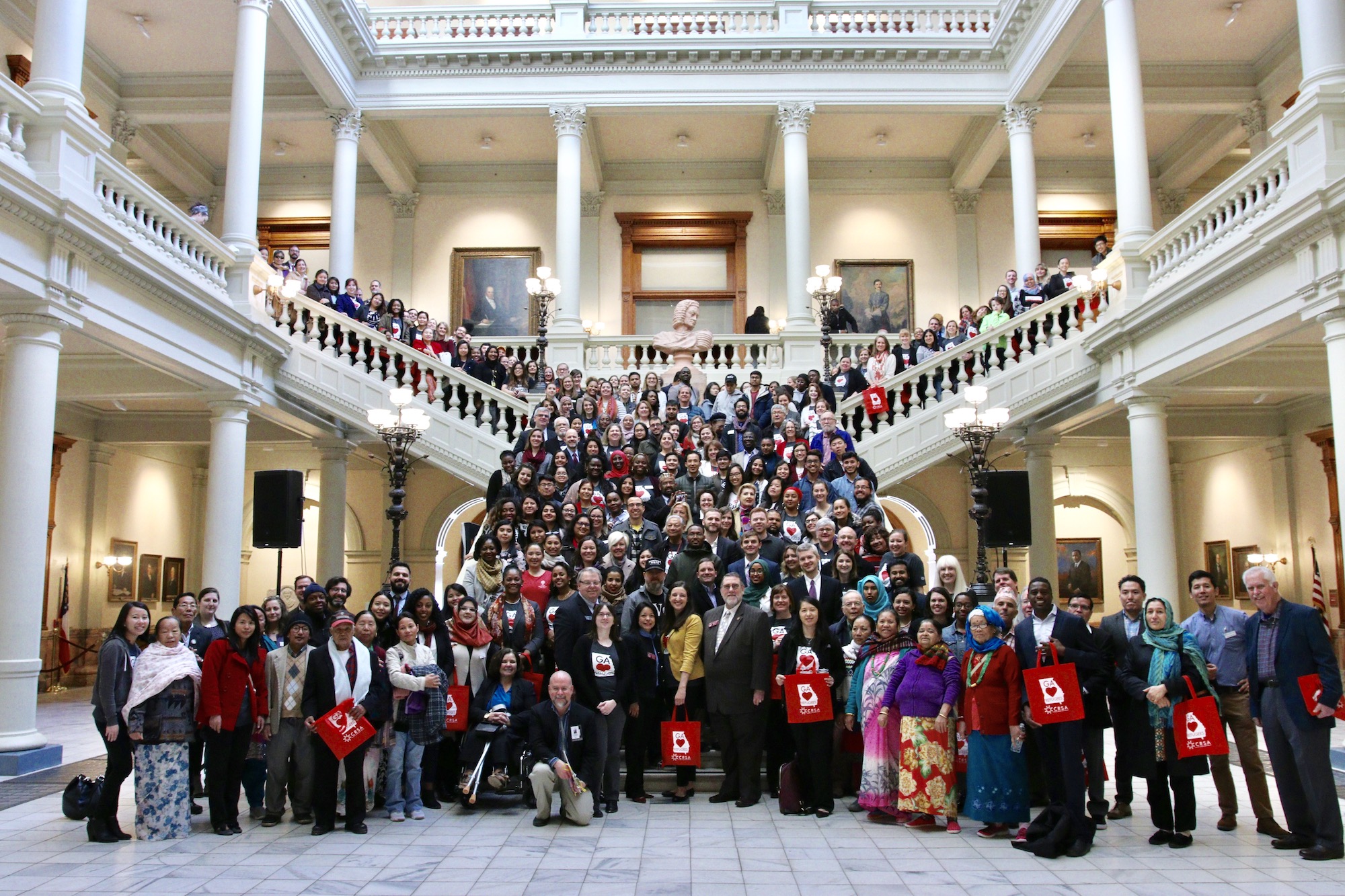 The Georgia state-level MRLA began with the Fifth Annual New Americans Celebration on March 14, 2018. The annual event was hosted by the Coalition of Refugee Service Agencies (CRSA) in the state with the Georgia MRLA cohort group as a sponsor.

The event is a day of education and outreach for refugees, immigrants and Georgia community members who support them. This year’s event was attended by over 250 people and 35% were at the State Capitol for the first time.

Participants dropped off materials to all legislative offices; requested meetings with lawmakers; and engaged 44 lawmakers in conversations.

The advocacy day event was followed by a two-day leadership training on June 29-30 which brought together twenty-four new migrant and refugee leaders for skills enrichment training and ongoing community mobilization engagement. 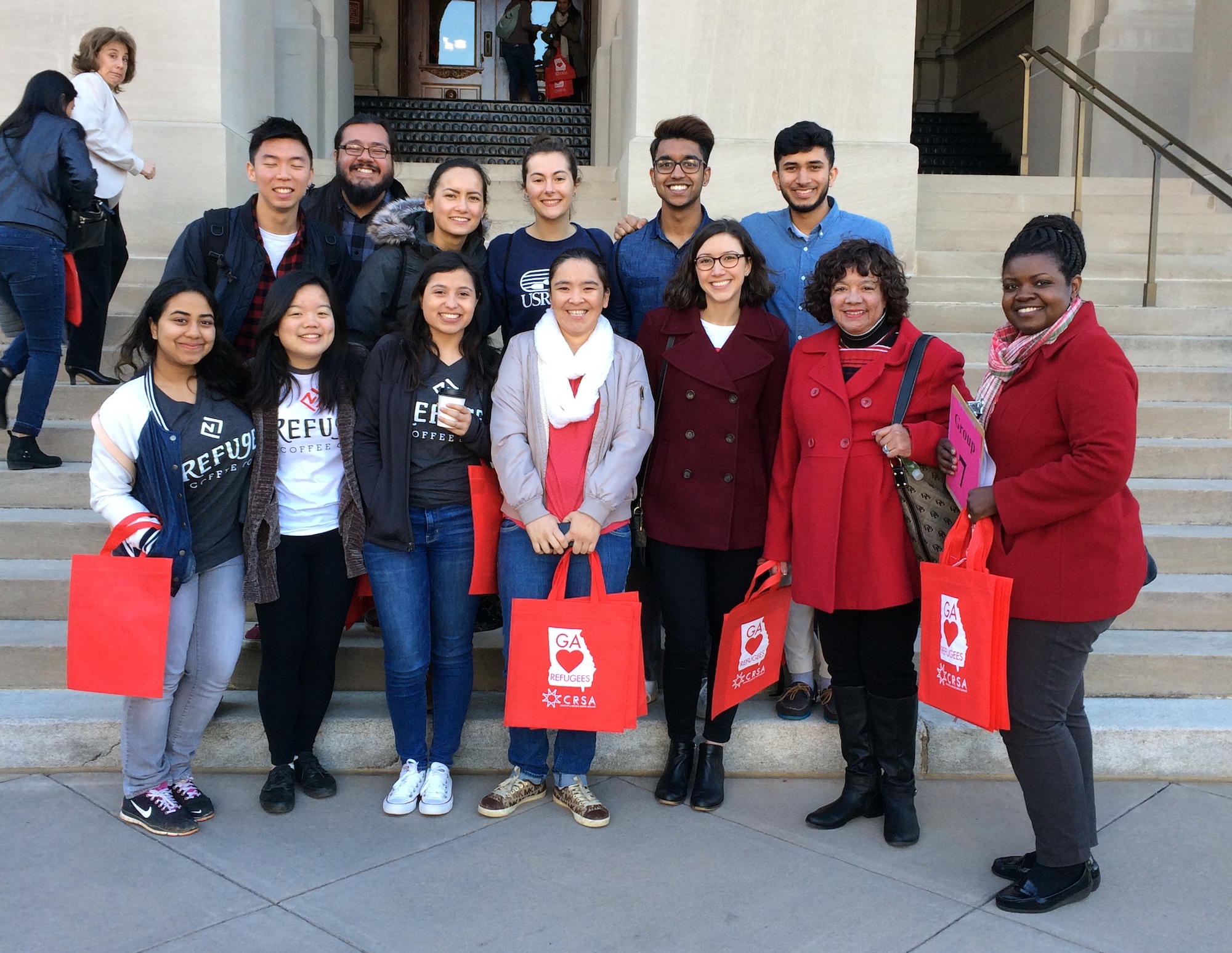 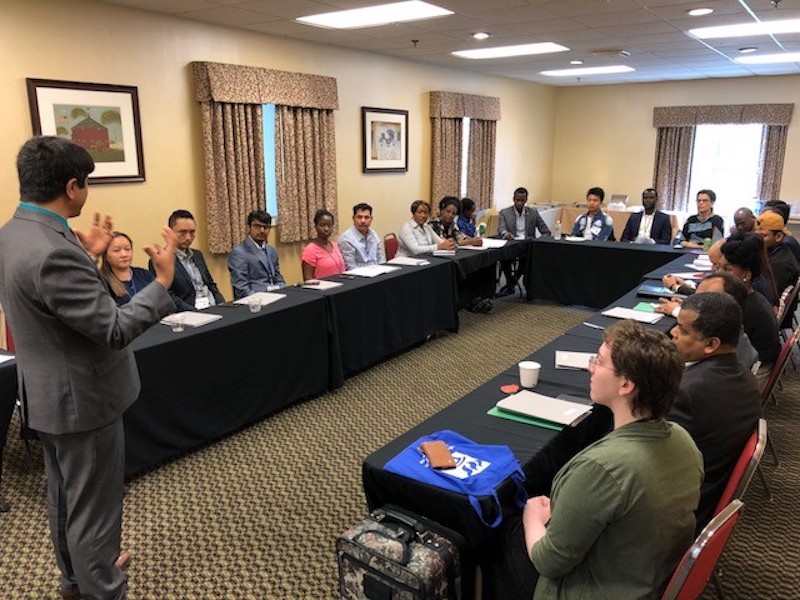 Under the leadership of Bhagirath Khatiwada, former refugee from Bhutan and LIRS Academy alumni (class of 2014), a 3-day New American Leadership Academy was organized June 5-7 in Concord, NH.

Bhagirath was supported by a planning committee comprising 5 MRLA alumni. The training was regional in scope, drawing participants from New Hampshire, Vermont, and Rhode Island.

Mayor Wilmot Collins of Helena Montana and Academy alumni (class of 2013) gave the keynote address by sharing his story and encouraging participants to get out of their comfort zones and be involved in community engagement activities.

Also in attendance was another Academy alumni (class of 2013), Omar Bah former refugee from the Gambia, author and winner of 2016 John F, Kiffney Public Service Award, Founder and Director of the Refugee Dream Center, Inc. of Rhode Island.

On the last day, participants conducted in-district visits to the offices of Senator Jeanne Shaheen, Senator Maggie Hassan and Congresswoman Annie Kuster to share their stories and advocate for the protection of refugees and urged them to oppose the Administration’s zero tolerance policy towards immigrants.

Next steps for the group is to take the experience back to their communities; stay connected as a regional network; hold quarterly conference calls to coordinate efforts in their respective states to promote pro-migrant and refugee environment; and plan for next year’s Academy. 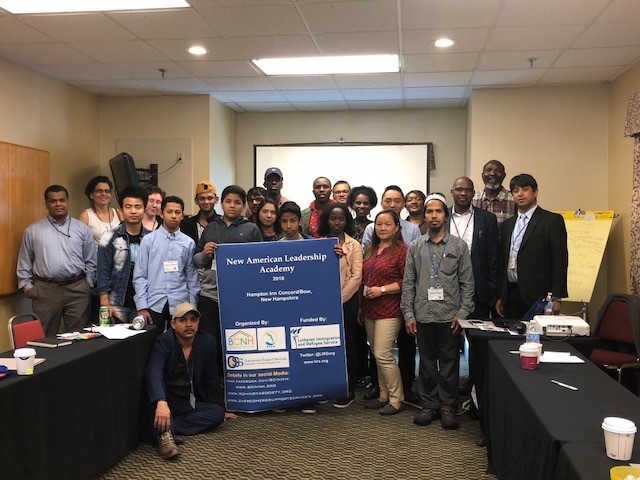 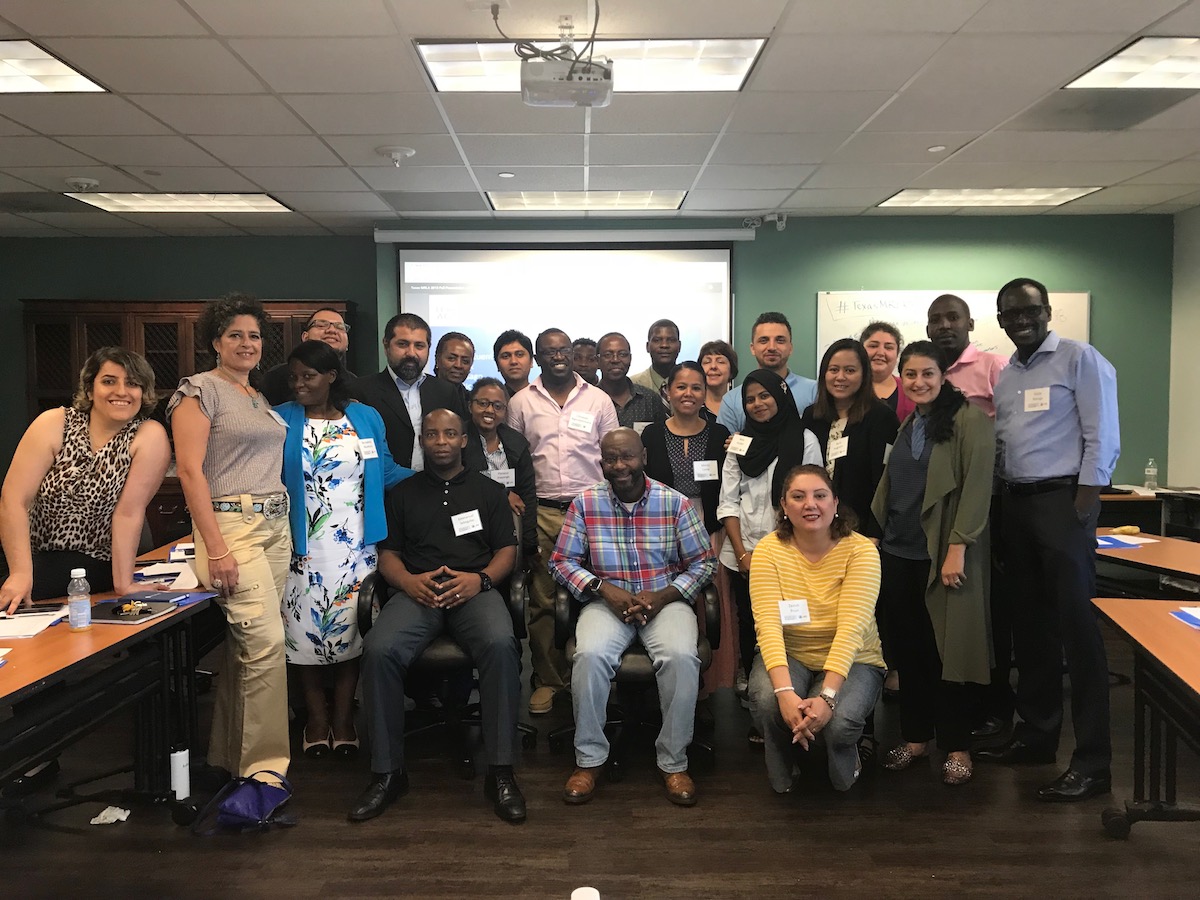 The Texas MRLA was held in Dallas from July 13 to July 15.

The 3-day training event brought together 30 migrant and refugee leaders from every major areas of the state including Houston, Amarillo, Austin, Dallas/Fort Worth, Abilene and San Antonio.

The training was put together by a planning committee of seven Academy alumni under the leadership of Justin Nsenga and Gislaine Williams, then RCUSA organizer in Texas. Wilmot Collins was the keynote speaker.

The event was also attended by high level official from the City of Dallas office of Welcoming Communities as well as Rev. Yohannes Mengsteab from the Texas District-LCMS and a former Academy alumni himself.

Yohannes encouraged the participants to LCMS District and Lutheran Churches in their communities as allies and source of support for their grassroots activities.

In his opening remarks, Mayor Collins focused on the power of story-telling, encouraging the participants to “get out your comfort zones” and share their stories with the objective of informing and educating those who are not aware of who migrants and refugees are and their incredible contributions to this nation.

Wilmot shared his personal story going back twenty years when he came to the U.S. as a refugee fleeing civil war in his home country, Liberia.

Participants engaged in day-long workshops around community organizing and leadership development; challenging hate and islamophobia, know your rights clinic; and using social media for advocacy. Most of the workshops were led by Academy alumni members.

The last day was spent in local clusters with discussions on strategic next steps in their respective cities. Since the conclusion of the training, the Houston group has worked together to put on a community event on Saturday October 13, 2018. 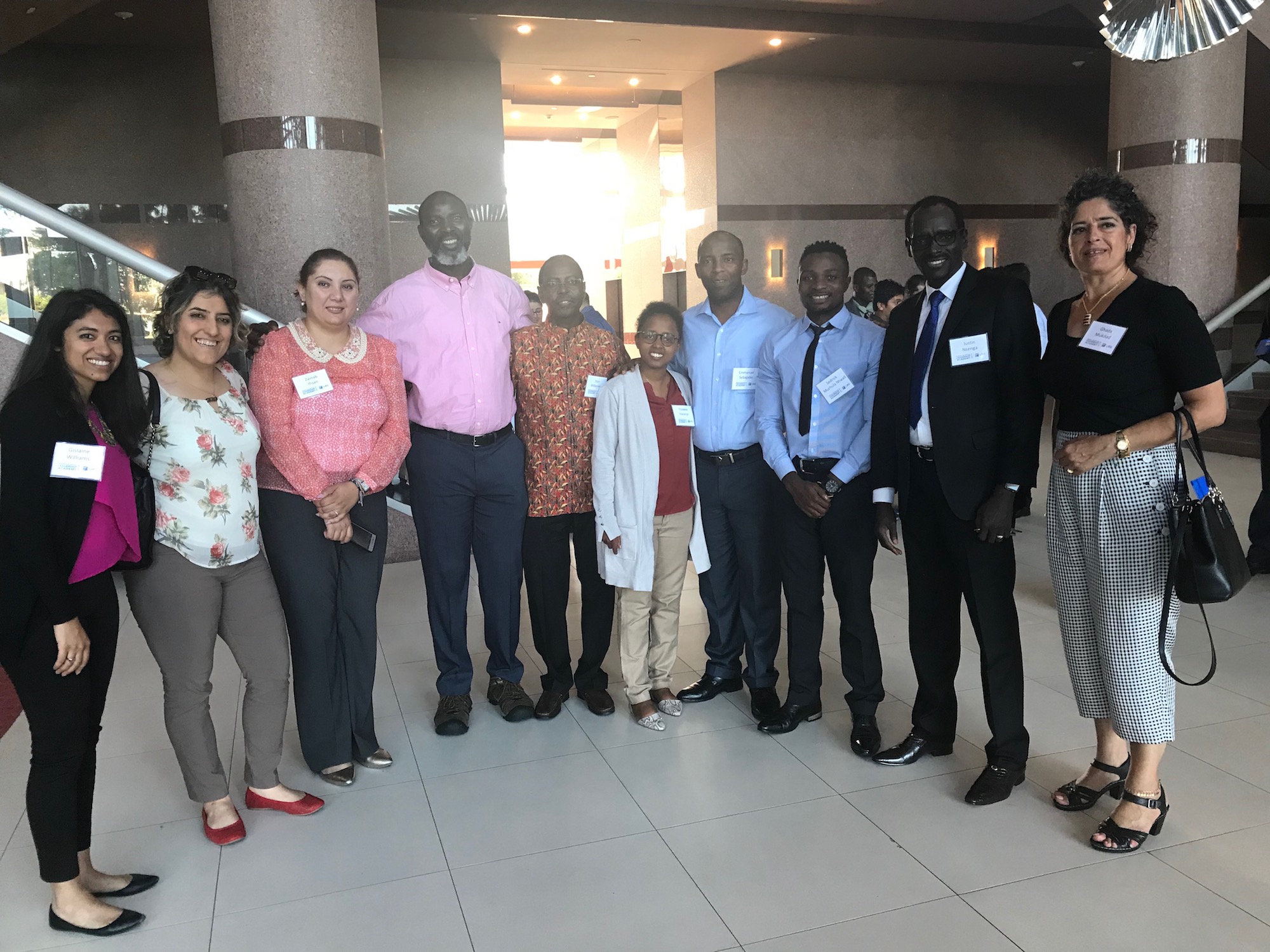 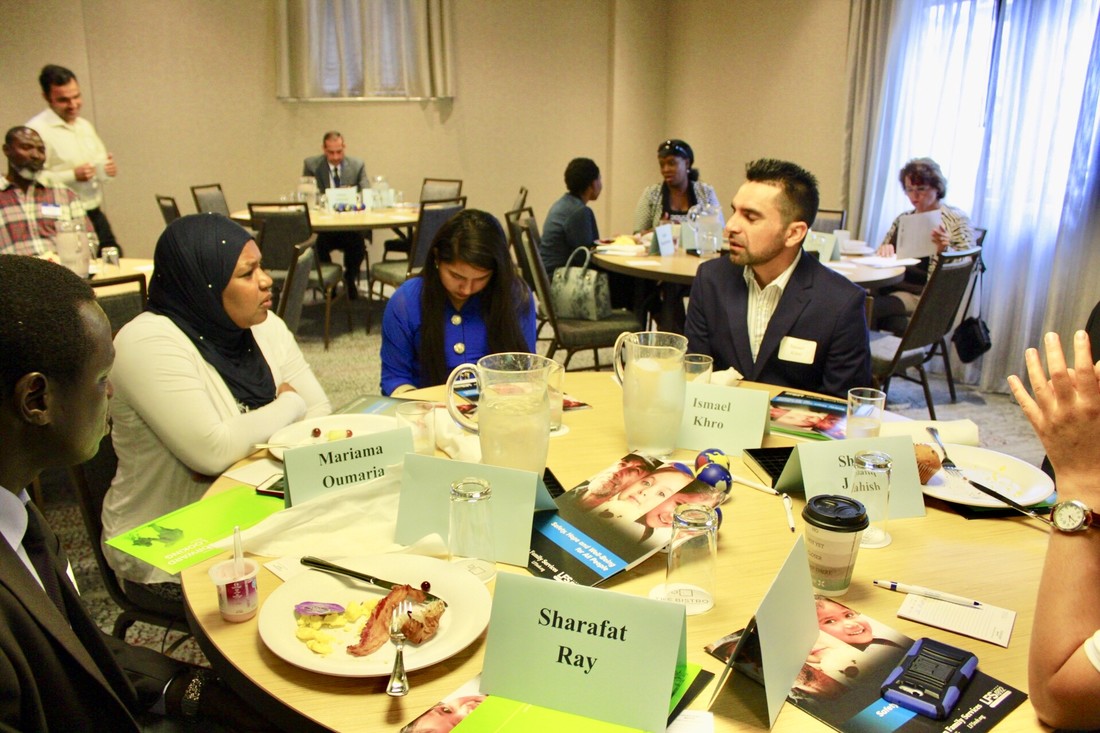 The event planning was led by Lacey Studnicka, director of advancement-Community Services with our resettlement affiliate partner, Lutheran Family Services of Nebraska (LFS-NE) with support from nine Academy alumni members from the state.

The first day was opened with a welcome address by Stacy Martins, LFS-NE CEO who was instrumental in the launching of the MRLA in 2013 when she was the VP for External Affairs with LIRS.

Mayor Wilmot Collins addressed the participants via skype, shared his story and challenged participants to engage in civic life.

The rest of the day was filled with training workshops that focused on challenging hate and islamophobia; know you rights; and a quite remarkable session on story-telling led by Rita Paskowitz.

The day was brought to a close with a fun dinner reception that featured dancing and a cultural fashion show.
The second and last day began with a trip to the State Capital, Lincoln for an organized New American Capital Experience hosted by Civic Nebraska.

The participants got a tour of the State Capital Building and were addressed by state legislator aides and a member of the State Supreme Court.

The event concluded with a strategy session on taking the experience back to their communities and concrete ways to build on the energy and excitement generated from the gathering. 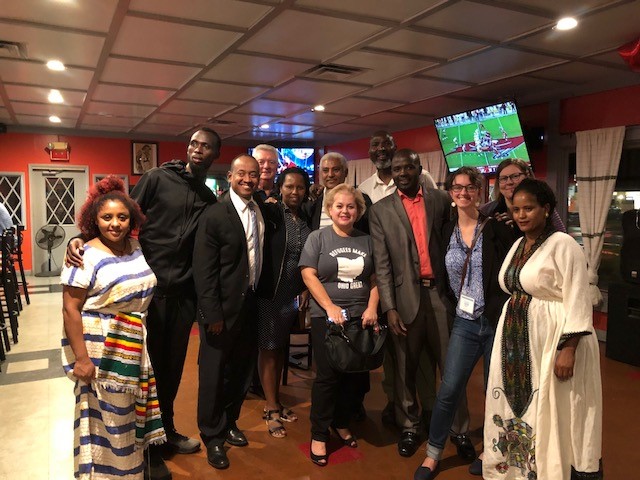 In Ohio we partnered with the Ethiopian Tewahedo Social Services Columbus (ETSS), a 501 (c) 3 organization caring for the needs of migrants and refugees in the state. AmeriCorps Fellow Maria Prasek and Seleshi Asfaw — an alumnus of the 2015 MRLA, former refugee from Ethiopia, and CEO of ETSS — led the planning and execution of the three-day training and advocacy day event (September 23-25) with support from five Academy alumni members and leaders of community organizations in the state. Twenty-six new migrant and refugee leaders were trained.

The next day, participants converged on the Ohio State House where they were addressed by panel of State legislators that included Rep. Bernadine Kennedy Kent, Rep. David Leland, Rep. Hearcel Craig, Former Rep. E.J Thomas and panel Facilitator Todd Kleismit, Director of Community and Government Relations of the Ohio History Connection on the importance of raising their voices and advocating for issues of interest to their communities.

LIRS is in the process of evaluating the five state-level trainings with the service of an outside independent consultant for lessons learned and ways to develop the program further.

The new class of 2018 Academy understand that we plan to engage them on ongoing basis is grassroots mobilization and advocacy on issues of importance to them and their communities.

We will also be providing support for efforts to explore and develop state level structures under which those trained can coordinate efforts at the state and local levels.

To this end, LIRS is organizing an MRLA network wide webinar titled “The Power of Civic Engagement” to welcome the new alumni to the group and educate on the importance of New Americans exercising their citizenship power during the upcoming mid-term elections in November.

This article is contributed by Folabi Olagbaju, Director of Outreach for Lutheran Immigration and Refugee Service.