LIRS Staff Member Observes Hearings for Unaccompanied Children, What She Saw Was Heartbreaking 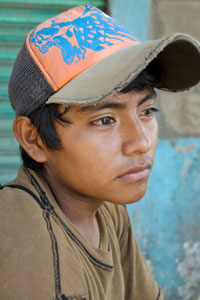 Today, I’d like to share a guest post from Jessica Jones, LIRS Children and Youth Policy Advocate. Jessica recently sat in on the hearings of several unaccompanied children. When she arrived at the courtroom, she didn’t expect to be a lifeline to families. But what unfolded shows how by lending a bit of time and compassion, lives can be transformed.

I recently visited the Baltimore Immigration Court to observe the juvenile docket. What I witnessed was heartbreaking. Roughly six or seven families sat in the long benches before the judge, all with one or two recently arrived unaccompanied children. On the left side of the court room sat the Department of Homeland Security (DHS) attorney with a stack of files next to him. On the right the desk remained empty; no attorneys for kids sat at the table, only a Spanish interpreter. As I observed the cases one by one, parents or other sponsors for the children stood up and answered the judge’s questions and received new dates to come into court.

The judge then called on a mother who sat behind me with her daughter. The judge explained her son’s case was not on her calendar. Instead the court still had her son as residing at Lackland Air Force Base (which has been closed for weeks) and scheduled to appear for a judge in San Antonio at the end of September. The mother looked confused. The judge then turned to the DHS attorney and asked him to look into it and send an email to the DHS attorney there to find out about it.

The DHS attorney replied, “Oh, I can’t do anything about it.”

The Judge responded, “You can send an email to inquire about it—can’t you?”

He relented saying, “Yes, I could do that.”

The judge then turned to mother and explained how she needed to fill out a change of address form and make sure to send it to the court in San Antonio because her son’s case was coming up. The mother looked completely puzzled. I sat there heartbroken, knowing full well that the mother did not understand what was happening. I knew as I sat there the mother had no idea that her son could mistakenly be removed in abstentia if the court did not receive the notice. The clerk shortly provided the mother with the form. The form was in English.

The mother turned to me asking, “Hablas español?”

I replied that I did not. She looked at me, handed me the form and pointed to me and gestured that I fill it out. She then handed her son’s packet of information that she received from the Office of Refugee Resettlement (ORR). The mother then handed me her green card. As I ruffled through the ORR packet, I was dismayed by how many of the forms were actually in English. I found the form I needed, verified her address and her son’s address, and filled out the form. I then pointed to where the mother needed to sign the form. She shakily scratched out a few initials and then handed it back to me. I then gave the form back to the clerk asking for two copies. I asked the interpreter to help me translate.

I went over all the details the judge said. She still looked puzzled. I then explained that I would mail the form to the San Antonio court and gave her the other photocopy.

I replied, “Nothing; I am a volunteer.”

Her daughter gave me a big smile and said in English, “Thank you!”

For the rest of the morning as the courtroom slowly emptied out, I only noticed one attorney who came in to assist a child. The judge then turned to the other cases on her docket, which included presumably other cases of children failing to appear for their court case. I wondered how many of these were families bravely trying to make sense of a very complicated immigration process. How many of them would not receive adequate notice? How many would be unable to understand what notice they were provided?

Here in Baltimore, there’s a juvenile docket every day. I am plagued by the question of how many children with their sponsors show up to court only to find out there is no one there to help them. It saddened me to see yet again our so-called justice system for these unaccompanied children—a shadowy due process.

Take action and help reunite families like these. Send a message to Congress through the LIRS Action Center.