LIRS Team Pulls Together to Defend DREAM Act in Maryland 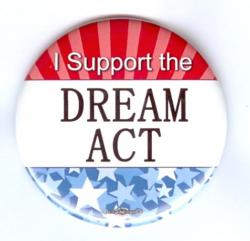 As the campaign to defend the DREAM Act in Maryland draws to a close with only a few days left until the November 6 referendum, I can’t help but to reflect on what an exciting few months it’s been working with LIRS to mobilize grassroots support for this campaign. Before asking all Marylanders who Stand for Welcome to go out to vote “for” Question Four, I wanted to pause and take stock.

When LIRS asked me to help lead the grassroots efforts on this campaign, I had no preconceived notion of what to expect, other than that this was an important issue and one that I support. Since coming on board, I’ve been blown away by how quickly and seamlessly the LIRS team and I have been able to work together to get the job done and ramp up this campaign among Maryland’s Lutheran congregations.

I have been equally amazed at how the entire staff of LIRS has been eager to offer support and share ideas that helped move the campaign forward. Of particular note is Child Specialist Michael Lynch, who took the initiative to reach out to me and offer his support. He arranged a meeting with me and Elizabeth Alex, lead organizer for CASA de Maryland in Baltimore, which led to some important connections with Lutheran churches in key strategic areas of the state that were supportive of the campaign.

Perhaps the highlight of my experience was participating in the October LIRS all-staff meeting, where the enthusiasm for the DREAM Act campaign was nothing short of overwhelming. I was there to update staff on activities to date on the campaign. To close out the meeting, everyone took part in an exercise on envisioning different scenarios of how our society would look with and without the DREAM Act. The report back from the breakout groups demonstrated not only how engaged staff was on the issue, but also how critically important the successful defense of the DREAM Act is to our state and ultimately, our country.

Even more importantly, the campaign message resonated with key leaders of the Lutheran congregations in Maryland. For example, Bishop Wolfgang of the Delaware-Maryland Synod, Evangelical Lutheran Church in America (ELCA), was an early supporter of the campaign. An immigrant from Germany himself, Bishop Wolfgang took an active interest in the campaign and pushed hard to mobilize the Lutheran congregations’ engagement on the ballot initiative. He reached out to all the ELCA churches in the state, asking them to prayerfully consider encouraging their congregations to support the DREAM Act and vote “for” on Question 4.

There is no doubt in my mind that by this time next week, we will be celebrating the successful defense of the DREAM Act in Maryland. Our state can set the example for the rest of the nation. It will also be true that LIRS’s efforts, in close coordination with those of other coalition partners, will have played an important role in ensuring that deserving Maryland youth can enjoy equal access to higher education, become productive members of the community, and live their America Dream.

Please come out to vote “for” on Question 4 on November 6! To learn more about what you can do, please visit our MD DREAM Act resources.