LIRS Welcomes Liz Sweet as Director for Access to Justice | LIRS
The LIRS phone number has changed! If you need to reach us, please call 410-983-4000.
Skip to content

LIRS Welcomes Liz Sweet as Director for Access to Justice 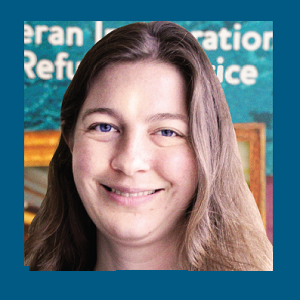 I’m excited to announce that Liz Sweet has joined our team as Director of LIRS’s Access to Justice unit!

In addition to her extensive credentials as an immigration lawyer, Liz brings leadership advocating on behalf of migrants and refugees and a demonstrated commitment to LIRS’s core values.

Liz’s leadership is exemplified by her tenure as the first full-time director of the American Bar Association (ABA) Immigration Justice Project. From the project’s base in San Diego, between 2008 and 2011, she developed a trailblazing pilot immigration pro bono project. That program provided high-quality pro bono legal services to detained migrants before all levels of the immigration court and appellate court system. Liz built relationships with law firms, bar associations and corporations to expand legal representation for men and women facing immigration removal proceedings. More recently, as Associate Director of the ABA Commission on Immigration, she led administrative advocacy before government agencies such as Immigration and Customs Enforcement (ICE) on issues affecting immigrants and refugees. In that role, her responsibilities included drafting key public comments on regulations, advocacy letters, and participating in negotiations with government officials.

Liz’s experience on the front lines of the struggle for immigrant and refugee rights is most evident in her 2006-2008 work as Children’s Staff Attorney for the Florence Immigrant and Refugee Rights Project in Arizona. She spent five years representing men, women and children in immigration detention in the southwestern United States. Her other professional accomplishments include serving as part of the Witness for Peace team in 2001-2002 in Mexico, where she drafted articles and contributed to reports analyzing NAFTA’s impact, and coordinating intake at the Immigrant Law Center of Minnesota in St. Paul.

A native of Ohio, Liz holds a JD from Northeastern University School of Law, Boston, and an undergraduate degree in international studies from the School for International Training in Brattleboro, Vermont.

Liz’s vision for Access to Justice is continued expansion of holistic services for detained migrants and those newly released from detention through a strong national network of legal and social service providers.

I’m very glad Liz is on our team. Welcome!