Samba Halkose: Finding A Better Life for My Children

Guest blogger Samba Halkose participated in the 2016 LIRS Migrant and Refugee Leadership Academy. The Academy convenes migrants and refugees from across the country in order to train and prepare them to return as stronger leaders and advocates in their communities.

My name is Samba Halkose. I am from the Democratic Republic of the Congo.

In Congo, I used to work as an Administrative Assistant for Customs Services in the Kivu region doing all the support work for the director. I loved my job, but the economy was very unstable. Sometimes I went two to three months without pay. I was single mother and after my father died, I was also responsible for taking care of my twelve younger siblings and my mother – life was not simple.

On top of my economic hardships there were also social problems. Back home single mothers are stigmatized. We were disrespected and called prostitutes. I couldn’t accept that label; I worked hard to preserve my dignity and to support my family. I used to read stories about single mothers in the U.S. and my mind was captured. In the U.S. single mothers were able to make a good living by working hard. I started dreaming of coming to the United States of America because I thought I would be able to give myself and my children a better life here.

It took me ten years to accomplish my dream. It took over a year for everything to be finalized, and I was so excited to be heading to a place where I would be able to provide for my family without judgment and without being treated unfairly. However, my children could not join me at first because we couldn’t afford to buy plane tickets for all of us. I decided to come by myself and work to gain the money to allow my two children to join me.

I arrived in the United States of America on December 25th, 1995 in the middle of winter. This was my first time seeing snow. I had very bad culture shock when I first arrived. I didn’t understand American culture and was afraid to speak up because I was embarrassed by my accent. I thought people were laughing at me when I spoke. I missed my children but didn’t know how to go about bringing them here. 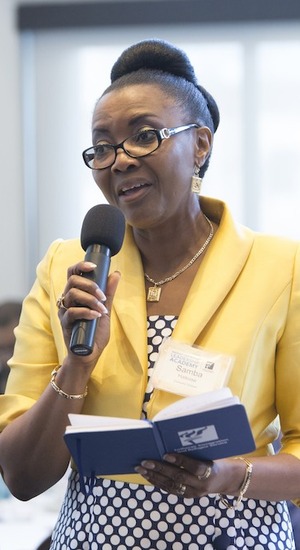 At this time I lived in a house with 23 other women who were new to the U.S. and were from all over the world. I started helping out in the community by giving rides to some of the ladies who didn’t have cars to make sure they got to school and work. It was by doing this and talking with the others about our experiences and our feelings that I was able to deal with the culture shock and other challenges. By sharing my story and listening to the stories of others I began to heal. I can now proudly say “I speak four languages, that’s why I have an accent.”

After six years of working and saving I was able to bring my children to the United States. I bought a house that my kids now call home. I am still volunteering in my community, especially with new Americans. I am the now the leader of the Congolese Women’s Community.

I applied for the LIRS Migrant and Refugee Leadership Academy because I am very passionate about helping other migrants and refugees. As a migrant myself, I know how it is hard to understand and transition into a new home and new culture.

What I advise my fellow Americans who want to help migrants and refugees to make them welcome here. The image new immigrants have in their heads of what the U.S. will be like is what they see in movies. We expect tall buildings everywhere and money coming from the trees! Of course, this is not how it is and those who come here learn that they will not get everything they want right away – you have to work hard for it. But, be patient with them. You have to understand that this is very far from their homes, and it takes time to adjust for majority of them. Don’t judge them. Let them tell you their stories.

If you and your congregation are interested in learning more about refugees, please consider participating in Refugee Sunday. You’ll find resources like videos, sermon notes, a fact sheet, and refugee quiz to help plan your Refugee Sunday event.