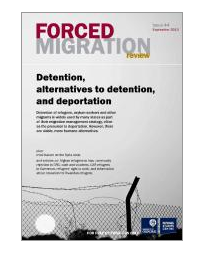 I’m excited to share the news that Forced Migration Review, the foremost international journal aimed at improving policy and practice for people affected by forced migration, has just published an article written by LIRS staff.

The September issue of Forced Migration Review, “Detention, Alternatives to Detention, and Deportation,” just appeared online and will be published in English, French, Spanish, and Arabic editions.

The LIRS contribution, “New Models for Alternatives to Detention in the US,” was written by Megan Bremer, Staff Attorney; Kimberly Haynes, Director for Children’s Services; Nicholas Kang, Program Fellow, Access to Justice; Michael D. Lynch, Child Specialist; and Kerri Socha, Child Services Placement Coordinator. The writers offer insights gained on the front lines of LIRS’s work for migrants impacted by detention, as well as through our work for migrant children.

I’m very grateful to our talented staff members for writing this article. The authors examine the reality of our broken immigration system as it affects both adults and children, and set forth some of the initiatives under way to offer alternatives to detention.

The United States’ immigration enforcement system sees deterrence as the most sustainable means of maintaining control of migrant populations, regardless of push/pull factors. Within this framework, forced migrants may face federal criminal prosecution, prison sentences, and deportation for being in the US without authorisation. While the sole purpose of immigration detention is to ensure compliance with immigration court proceedings and judicial orders, its overuse demonstrates how the philosophy of deterrence has permeated the system by shifting towards the most restrictive and seemingly punitive enforcement mechanisms. While deterrence holds little value in the context of forced migrants who flee their countries of origin to survive or who are desperate to reunite with family, the US government does not distinguish forced migrants from other migrants when making decisions regarding detention.

The authors conclude with insights into challenges facing community-based alternatives to detention, despite their practical and humanitarian advantages:

US NGOs have been advocating for and piloting community-based alternatives to detention since the 1990s. The most recent model is coordinated by Lutheran Immigration and Refugee Service (LIRS) and implemented by more than 20 local NGOs in seven communities nationwide. It aims to build infrastructures of available, accessible, acceptable and high-quality community-based interventions to support compliance with conditions of release (e.g., appearances at removal hearings) in a manner that is more cost-effective than detention, respects human rights, improves integration and improves client health and welfare.

It has faced challenges in three main areas: conducting both fundraising and community outreach to garner funds and volunteers to assist with service delivery; collecting data to measure the impact of the community-based approach and to inform recommendations; and connecting clients with scarce services for legal, medical and mental health care, visitation, housing, education and employment. These challenges could be overcome with increased funding, especially from the US government which currently offers no funding for civil- society-led alternatives. However, the political will to shift resources away from detention is being undercut by the drive to deter future migration – a formidable barrier to expanding effective and humane community-based alternatives to detention.

It’s important that we spread the word about alternatives to detention. Please share the link to “New Models for Alternatives to Detention in the US” widely via email, as well as Facebook, Twitter, and other social media. Also, please check out this entire issue of Forced Migration Review, whose authors include some of the preeminent researchers and advocates in the world. As the editors write:

Asylum seekers and refugees – men, women and even children – are increasingly detained and interned around the world, as are numbers of other migrants. Sometimes detained indefinitely and often in appalling conditions, they may suffer not only deprivation of their liberty but other abuses of their human rights too. Detention may appear to be a convenient solution to states’ political quest to manage migration (often as a precursor to deportation) but it is an expensive option and has lasting effects on those detained. In the search for a more humane – and cheaper – approach, agencies and government authorities have trialled a variety of alternatives to detention. [Forced Migration Review] 44 includes 36 articles on immigration detention, alternatives to detention, and deportation, plus a mini-feature on the Syria crisis and a selection of other articles.

At a time when policy-makers all over the world are grappling with issues of detention and deportation, it’s critically important that they have this type of analysis at their disposal. This article puts facts on alternatives to detention in front of an international, multilingual audience, and for that I’m extremely grateful to our staff authors and Forced Migration Review.