At the end of September, LIRS led a mission to Tucson, AZ to bear witness to the conditions of detention centers and immigration facilities housing children and individuals.  The following story is part of a five-part series we’re calling”Border Trip 2018” — a firsthand account written by Pastor Clint Schnekloth, Board Chair of Canopy Northwest Arkansas. To read the series in its entirety, you can go here.

The Scapegoat & The Desert Butterfly

Since 2001, when I returned from Slovakia and global missionary service with my denomination, I’ve been an active volunteer with Lutheran Immigration and Refugee Service. Something about that experience of living as a foreigner in Eastern Europe cracked things open for me—the hospitality I experienced, the bureaucratic gauntlet I sometimes had to run, all of it opened a level of empathy for strangers arriving at our shores and borders I’ve never been able to shake.

If you can remember that far back, you know then as today refugees were looked upon with suspicion and lumped in with bad actors, as if they were in league with the terrorists who attacked the World Trade Center. Even though no refugees were involved in the 9/11 attacks, and even though refugees commit less crime than any other population in the United States, nevertheless one of the first steps taken after 9/11 was to immediately halt (and then subsequently slow) admission of refugees. Wasted security steps focused on the wrong population. Wrong-headed at best, dangerous at worst inasmuch as it gives a false sense of security with its focus on securing the wrong population from entry.

We’ve got a story in the bible about this, Leviticus 16:8. It’s about a goat. When the sins of a community become too much, and strife is rampant, the people are commanded to throw their sins on the goat and then cast it out of the community. It’s the ritual of the scapegoat. But the ritual tells us much more about the community enacting the ritual than it does about the goat. The goat remains an unjustly burdened and excommunicated caprine.

The strategy of those seeking to limit foreigners (especially foreign nationals of specific nationalities and religions) from coming to the United States will, of course, be to set the two up against each other. Arguments for mutual exclusivity are distracting and effective. So of course when Mike Pompeo made the announcement about the 30,000 refugee ceiling, he also said, “The United States needed to prioritize hundreds of thousands of people who have arrived at the United States border, claiming a credible fear of returning home, rather than refugees overseas who have already officially qualified as in need of protection and resettlement in another country.“

LIRS is called to intentionally and carefully work with these different populations, always with the same goal in mind of recognizing the full humanity of all those who come to us seeking refuge and sanctuary. 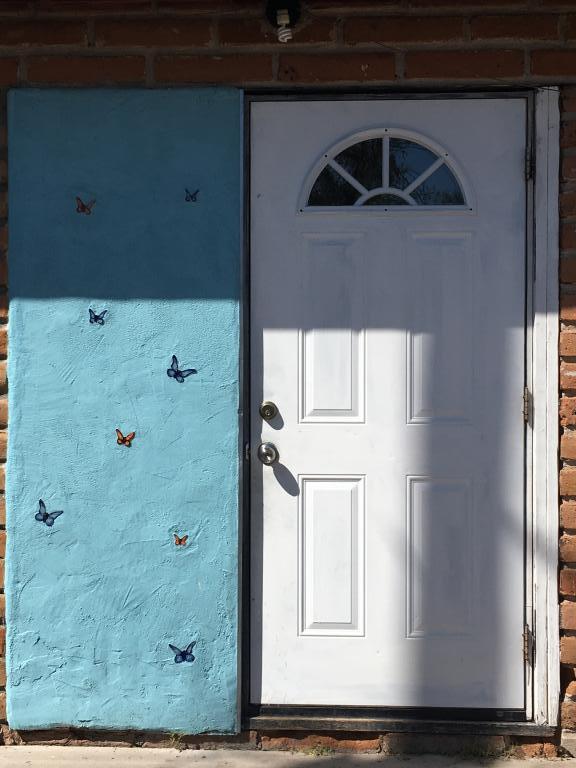 After the long drive back from Eloy we arrive in Tucson, passing some enticing Sonoran hot dog food carts en route. Our group plans to tour Casa Mariposa. Casa Mariposa is a house for those recently transitioning out of detention. Over the past few years, it has especially focused on housing members of the LGBTQ+ community who were in detention. The house is situated in a neighborhood just outside the downtown, across the bone-dry Santa Cruz riverbed and below the Catalina Foothills.

Casa Mariposa is currently set up to house four residents in each of the structures on the property, with capacity for more if emergencies arise. The yard and front windows are decorated with symbols and signs of welcome, like Refugees: Tucson Welcomes You, Black Lives Matter, and Standing With Muslims Against Islamophobia and Racism. One whole door is covered in butterflies (Mariposa is Spanish for butterfly).

Most of the residents are out at their jobs for the day. The house is minimally air-conditioned, warm but not hot. I can imagine after living in an icebox, residents might appreciate moderation.

One resident is home working on paperwork. She takes time to greet us. Our tour guide, Rocio, was once a detainee at Eloy. Granted asylum a few years ago, she now coordinates parts of the work of Casa Mariposa and is a prominent activist on behalf of asylum seekers. She is clearly proud of the house and of their work and has a warm and caring relationship with the resident.

That evening we attend a play by the Borderlands Theater company. The play is presented site specifically at Southside Presbyterian Church, the birthplace of the 1980s-era U.S. Sanctuary movement. The play (the first in a trilogy dealing with immigrants seeking refuge in the U.S.) tells the story of Carol and Mica, a lawyer and an advocate who seek to help Salvadorans fleeing civil war process their asylum applications. 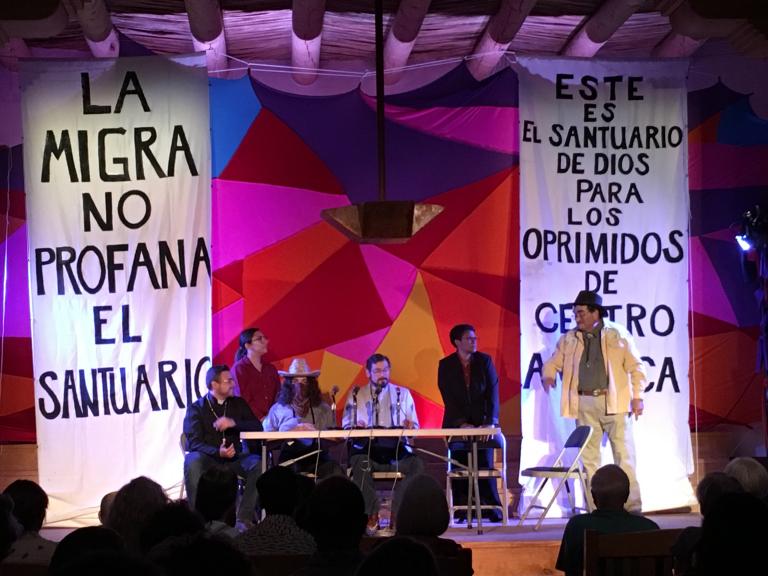 The border patrol is not friendly to their efforts. Instead of following due process and allowing the immigrants to apply for asylum, they frequently detain new arrivals and deport them immediately back to El Salvador. This doomed many asylum seekers to certain death, but our country at that time had an interest in covering up our complicity in the mess we had created in the region.

Carol and Mica enlist the assistance of a Roman Catholic priest and later the pastor of Southside Presbyterian. A lay Quaker leader also becomes involved. So do recently arrived Salvadorans. The play depicts the agonizing, exhausting work involved in protecting the rights of the asylum seekers. Eventually, the pastor and Quaker decide they will need to follow God’s law rather than human law. They bring asylum seekers directly into the United States and offer them sanctuary in the church.

I remember John Fife, the pastor of the Presbyterian congregation, as the face of civil disobedience and the sanctuary movement. Because I now serve as a pastor, the Fife portrayal left me thinking vocationally about church and civil disobedience. The play helped me sympathize with the agonizing decisions Fife had to make as he considered the impact of declaring sanctuary for his family and congregational life.

At one point, his Quaker friend enters the sanctuary, and says to Fife, “I’m coming to speak truth to power.”

Fife replies, “There’s a lot of that going on lately.”

Will then says, “If it is between God’s law and human law, we must follow God’s law. We have no other choice.” When Fife tells Will it’s not that easy, Will leaves, adding, “Let me know when you come to your senses.”

Fife does in fact eventually come to his senses and leads his congregation in becoming a sanctuary for immigrants. The play concludes with the decision to be a sanctuary church.

Soon many other congregations in the Tucson area and then nationally followed suit, giving birth to the sanctuary movement. Many denominations published statements of support, including Lutherans, who in 1984 “Resolved, that The American Lutheran Church at its 1984 General Convention…offer support and encouragement to congregations that have chosen to become refugee sanctuaries.”

As I sat in the Kiva (the church’s sanctuary is in the round, modeled after the spaces Puebloans use for religious rituals), I found myself sobbing uncontrollably, for at one point in the play, the sanctuary leaders have organized a Christmas Eve candlelight vigil. Will the Quaker is late, and everyone is worried he might have been arrested at the border.

Instead, he arrives just in time, a young mother and baby his most recent co-travelers. He introduces them to the gathered congregation and then proceeds to read the Christmas story aloud from the Gospel of Luke. Rarely has a play so transformed a familiar text from Scripture in the way this moment did for me. I will never read that text the same way again.

Following the play, Borderlands Theater hosted a panel discussion on immigration awareness, outlining what Tucson groups are doing to help in the immigrant crisis. This group of women leaders (by contrast, and significantly, I remembered earlier in the day noting that all the wardens at the detention center were men) spoke about their non-profit and organizing work. Our group, having spent the day with Rocio of Casa Mariposa sat near the back and applauded each time Rocio spoke, proud of our new friend.

Next up in the series: Ancient Trees, Young Lives.