‘Shafiq has the tools to change jobs or career paths’: LIRS Releases Careers and Connections Guide for Employment Mentoring 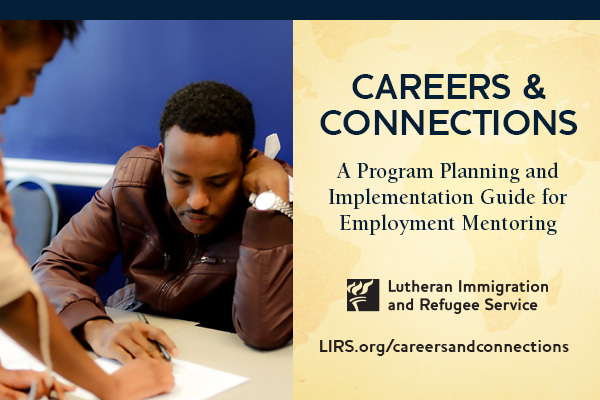 Lutheran Immigration and Refugee Service has walked alongside migrants and refugees as they have built new lives in America since 1939. Through our work, LIRS and Lutherans across the country have learned to respond to specific, targeted needs and address the immediate challenges newcomers face. Too often, however, the complex emotional, social, civic, and economic factors that contribute to a comprehensive sense of well-being and self-sufficiency for newcomers are not fully addressed through traditional programming.

We’ve learned that employment-focused mentoring is one way that local communities and churches can stand with newcomers to overcome obstacles that inhibit economic success. This month, LIRS released Careers and Connections: A Program Planning and Implementation Guide for Employment Mentoring, a new tool for partners interested in starting a mentoring program and supporting new Americans along their journey of integration. It provides tested resources designed for local service providers, congregations, or community groups to create and grow a program.

Shafiq: When I came here, I applied for dozens of jobs, but I never heard back from any of them and I didn’t know the reason. After working with Dan, I found out that the reason was my resume. I had an Afghan style 10-page resume and I am sure none of the employers ever looked at it. Dan helped me to make a professional resume. There were things that I have done in Afghanistan but I didn’t consider them as part of my skills and Dan was the one who pointed them out. Now I have a career goal ahead of me and I am working with Dan to set up some more informational interviews with individuals who work in the fields that I am interested in.

I do have more confidence in talking to people about my life and career goals. I know what to ask during the informational interviews. I know better about jobs and office work here. As a result of his work, I now have a good job and I am successful in my job so far. We will be doing some mock interviews in the next two weeks to get to know with interview system here in [the] USA.

Dan: I know Shafiq has the tools within him to change jobs or career paths- not just now, but throughout his life. One area that I really grew to appreciate in Shafiq (that I think is the probably the same for many who have resettled here) is his commitment and focus on owning his life. For example, Shafiq has a full-time job, is in college and has a wife and four kids. He could have said he was too busy to make time for this Careers and Connections program and it would have been a totally [legitimate] response. However, he added that into the mix of his life, and gave up some family and study time in the process, to better ensure his and his family’s success down the road. I’m impressed with the drive and the hard work immigrants are willing to put in to take ownership of their futures.

Mentorship programs help new Americans achieve a better career and expand their social ties in the long term, and mentoring provides the moral support, planning, and preparation to take the next step in the process. Mentor relationships also have benefits beyond the job search: many newcomers identify increased self-confidence, and mentors also report more global awareness and drive towards welcoming newcomers after participating in a mentoring partnership.

We thank the Lutheran Church—Missouri Synod for its contributions to the pilot program, and the Calvin K. Kazanjian Economics Foundation for its grant that enabled us to formalize the concept into the Careers and Connections Guide. LIRS encourages resettlement agencies, community-based organizations, churches, and other places of worship, as well as state and national program leaders, to use the material to create and sustain mentoring programs that are easily incorporated into your existing work and also open new doors for volunteers, funders, and friends. Together, we can improve career opportunities, combat isolation, and strengthen our collective response to new neighbors.