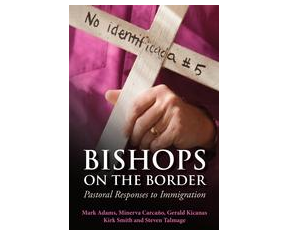 I’m delighted to bring you an interview with Bishop Steve Talmage of the Grand Canyon Synod of the Evangelical Lutheran Church in America (ELCA). Bishop Talmage has been a champion of migrants and refugees throughout his career. He recently shared in writing the book Bishops on the Border: Pastoral Responses to Immigration.  Royalties from the book will be used to support border ministry. LIRS Media Relations Specialist Clarissa Perkins carried out the interview over email.

Clarissa Perkins (CP): You’ve stood with immigrants and refugees throughout your career. How did you initially become interested in immigration?

Bishop Steve Talmage (ST): During my first call at American Lutheran Church, Tucson, AZ in the mid-80’s this politically and theologically conservative congregation was personally connected to the swirly drama around the Sanctuary movement and the movement of people particularly from Central American countries due to economic and political upheaval.  Though the congregation did not embrace or endorse the Sanctuary movement, the presence of the three Yanez children opened eyes and minds to the problem with existing and now current immigration problems.  The aunt of these three children was an active member of the congregation and faculty member at the University of Arizona.  She received a request to get these three elementary age children out of El Salvador as quickly as possible.  The children had seen their father, a military officer, shot and killed, and their mother was dying of cancer.  The aunt traveled to El Salvador and following the death of her sister, she escorted the three children without documents across the border.  As the aunt sought legal guardianship, the issue of their legal residency came before the courts.  By this time the children had been a part of the community for several years.  As the word got out that these three could be deported, more than 50 members of the congregation crammed into the judge’s courtroom as a united witness that our system is broken and these children need the protection of their aunt and the United States given their father was assassinated and their mother was dead. This firsthand account made the immigration issue personal rather than theoretical.  Thankfully, the children were allowed to remain.

CP: You recently participated in a statewide conference on immigration reform in which Sen. John McCain took part. Can you tell us a little bit about the ideas discussed at the conference, and how people like the senator responded?

ST: On August 28, I gathered with 150 other Christian leaders from across the state to discuss how our faith communities could engage in continued advocacy to support Comprehensive Immigration Reform.  We were privileged to have Senator John McCain and Representative Raul Grijalva join us.  They both presented current realities and urged all of us to encourage our folks to engage our elected leaders with the hope that some form of legislation would be brought to the House floor and voted on, so then the House and the Senate could go to Conference and continue to work on developing legislation that both chambers could approve.  Sen. McCain invited us to ask those in the House who have been opposing any action or have remained silent to simply ask this question, “Is it right that we have 11 million people living in this country who have landed here for a variety of reasons, but now they must live in the shadows, under a cloud of fear, and are prevented from contributing to the betterment of this country?”  He said most would respond with a “No.”  To that he said, “Ask them what their plan is to address this?”  He also affirmed that with the increased technology developed in Iraq and Afghanistan we possess the ability to secure the border without increased fencing and even more boots on the ground.  The technology can allow us to target the areas where the smugglers are accessing the border to bring across the weapons, drugs, and humans.  Both urged us to motivate the people in the pews to be involved in the political process, because the majority of Americans (70%) have expressed a desire for comprehensive immigration reform, but the minority voices are screaming the loudest.

CP: You and a few other faith leaders were invited to share in writing the book Bishops on the Border: Pastoral Responses to Immigration. What experiences do you share in the book?

ST: Each of the four bishops was invited to write from our own personal experience of serving and living in a border state.  I wrote from my own long-time family history in El Paso, Texas and Arizona (over 100 years) and I provided some historical background on how the border has changed and immigration enforcement has varied for the past 150+years.  I wanted to frame my chapter with a Biblical lens and a Lutheran perspective.  I shared the earlier story of the Yanez children, another story of Jose’, a man I have known for over 15 years, and stories out of Grand Canyon Synod communities.  It is my hope that people of faith capture the common humanity around this issue as well as the supreme commandment to love our neighbor as ourselves.

CP: Were there any striking commonalities between your experiences and the experiences of the other authors?

ST: Yes, we each have had different but similar experiences in a personal way that has moved us from the sidelines into the advocacy arena.  All of us ground this response in light of our understanding of the Scriptures and the purpose of the Church.

ST: At this time we have agreed to hold all royalties in a fund at the Episcopal Diocese of Arizona with a particular border ministry or ministries to be determined pending the royalties received.  Be assured none of us will be earning a penny off of the sales, but all royalties will be given away.

CP: What would you most like people to know about your work or the work of your synod?

ST: My work as bishop is much more than simply being an advocate in the public square, but being an advocate is a critical source of living out the primary mission of being a voice for the voiceless and the vulnerable.  As Christians we cannot avoid the primary expression of Jesus’ ministry, which was to the least, the last, the lost, and the little.  As a bishop in the ELCA and the Grand Canyon Synod I am most excited when our congregations are engaged in knowing their neighbors and working together to address the variety of needs that are raised.  I am grateful for the seven Latino outreaches, as well as our two to the Navajo and Urban Native American population.  As an ELCA leader I appreciate being a part of a denomination that is committed to working with other communions both in the Christian household and the interfaith household to address complex and often emotionally-charged items, but to do so driven by a commitment to seek the common good.  Like any synod in the ELCA we are challenged by the shifting spiritual landscape in the United States where increasing numbers of people are disaffiliating from the church or never ever connecting.  As a synod we are working to grow disciples who are centered in Christ through engaging worship, intentional hospitality, studying the Scriptures, regularly praying, and seeking to release the gifts of all of God’s people for the sake of being “little” Christs in the neighborhood and the world.