Since the Syrian civil war began in 2011, more than 11 million Syrians are estimated to have fled their homes due to the conflict. Of these, approximately 4 million Syrians have crossed into other countries and are refugees. This is where they’ve gone:

Turkey has taken in the largest number of Syrian refugees. With only 22 refugee camps, the majority of refugees must fend for themselves in urban areas. Because of these harsh living conditions, some choose to move on from Turkey. Turkey serves as a major launching point for refugees to cross into Europe, either via boat over the Mediterranean Sea or by land across the Balkans.

While many Syrians are fleeing to Lebanon, they receive little support here. The Lebanese government has not built refugee camps, and because of this many Syrian refugees reside in temporary tents, have imposed curfews, and don’t have access to healthcare or education. In Lebanon, the large influx of refugees has increased the population so drastically that now 1 out of every 4 people in Lebanon is a Syrian refugee. 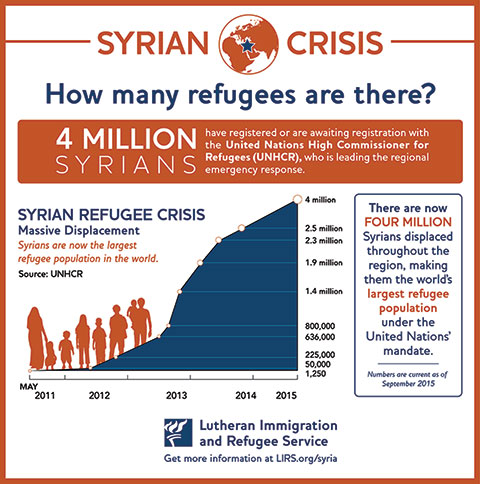 Only about 20% of Syrian refugees in Jordan live in camps. The rest may live with relatives, friends, or on the streets. The large number of refugees that have come into Jordan since 2011 have put a strain on the economy and infrastructure of the country. This is the case with Turkey and Lebanon as well, as all three countries are finding it difficult to provide services to both their native populations and to refugees.

At the outset of the Syrian conflict in 2011, many refugees were fleeing into neighboring Iraq. However, since the rise of the Islamic State, this has changed and now many Syrian refugees are having to pack up and move again out of fear for their lives, while many Iraqis are also being forced to become refugees.

Egypt has also taken in many Syrians. However, government instability in Egypt has affected the ability to uphold the rights and protections that refugees are supposed to receive in host countries. Egypt is also an exit route for Syrians to cross the Mediterranean Sea by boat to gain access to Europe. 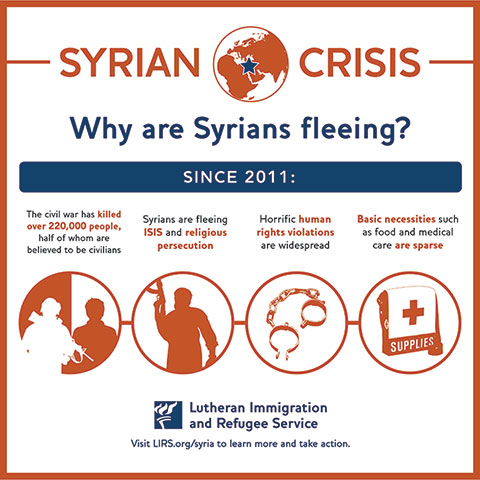 Germany is the largest refugee receiving country in Europe. Alone, Germany has accepted about 40% of the Syrian refugees in Europe. Germany expects their total number of asylum seekers to reach 800,000 by the end of the year. There have been some incidents of exclusion and xenophobia towards refugees, and these may magnify as the number of Syrian refugees settled in Germany increases.

Sweden is one of the most sought-after destinations for Syrian refugees. Sweden has an open-door policy, meaning that if an asylum seeker can make it to Sweden, they will be given sanctuary. However, due to the large influx of refugees over the past few years, Sweden is beginning to experience some xenophobia.

How the U.S. Fits In

Refugee Council USA, a coalition of advocates for refugees of which LIRS is a member, has urged the U.S. government to do far more by resettling 200,000 refugees in FY2016, including 100,000 Syrians. For the U.S. to admit Syrians now would reflect a willingness to live up to its refugee protection obligations, and help relieve allies that are currently hosting millions of Syrians seeking refuge.

Sign the petition to support Syrian refugee resettlement or visit www.lirs.org/Syria for more information about ways to be involved.