Top 6 Posts From 6 Months of Through Courageous Eyes

To mark the past 6 months of beautiful art by people with amazing stories, we share a recap of the top posts in the Through Courageous Eyes series. From painting and photography to craft making and film, these stories have been as varied as the artists who inspired them.

1. An Aspiring Architect Paints from Baghdad to Philly

Mayyadah Alhumssi is an Iraqi painter now of Philadelphia, whose work includes scenes from both Baghdad and Philly.

Of her painting titled “Baghdad” she says, “when someone mentions this word, what comes to my mind is the city of One Thousand and One Nights (also known as Arabian Nights) over the Tigris river with its features: the arches, the domes, and the palm trees.”

2. ‘Permanent and Beautiful’ A Young Artist Finds His Voice in Art

Beto Soto, age 20, was born in a small pueblo town in Mexico. After immigrating to the United States in 2000, Beto and his family moved repeatedly, from town to town, in search of work and a place to stay.

It was during these tumultuous years when Beto struggled to make meaningful friendships and cope with his family’s volatile living situation that he turned to art. “Art was a way for me to make something permanent and beautiful, a way to create a different world, a place to escape.”

3. ‘Only Travel at Night,’ Refugees from Burma Express Their Journey Through Art

Erika Berg, who lives in Seattle, has now published Forced to Flee: Visual Stories by Refugee Youth from Burma. The book is a collection of work depicting the experiences youth have had in fleeing their homes, living in refugee camps, and hoping for a future peaceful Burma.

This strongly visual book tells the stories of being attacked, having to flee, holding on to hope, and reaching safety – all in the youths’ own brushstrokes and words. These visual stories powerfully tell the wide range of experiences that refugee youth from Burma have had.

4. ‘Something With Their Hands’

FORAI – Friends of Refugees and Immigrants – is a non-profit that provides training and mentorship for refugee women in St. Louis, MO. The participants create handcrafted items to provide supplemental income for their families. Not only does FORAI walk alongside, listen, equip, and empower, but the volunteers also do this through artistic and expressive means as women create beautiful and useful products.

At its heart, FORAI “represents a community of volunteers, artisans, Americans, refugees and immigrants who are ‘coming together to create beauty and opportunity.’”

5. ‘Drawings By Themselves’ A Look into Immigration Detention 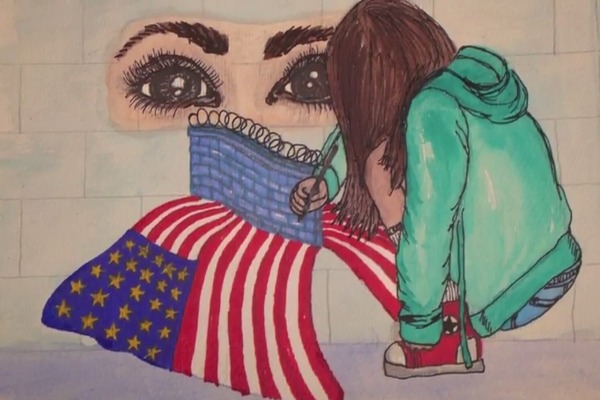 Drawings By Themselves: Portraits of America is a multimedia project, which provides children and parents impacted by U.S. immigration detention with an opportunity to share their stories and their drawings.

The title refers to the fact that many of these mothers, fathers, and children are separated from their family; they are alone, and hence, the drawings are done “by themselves.”

This featured artist, Marcela, is originally from Costa Rica and came to the United States to seek asylum. While in detention, art was an outlet for processing her feelings, but she has been drawing as long as she can remember.

The filmmaker, Bilal Alabbood, shared a short video he produced about violence in his home country of Iraq called We Live In The Same House.

The film evokes a sorrowful response as it invites viewers to join in mourning the destruction and violence it captures. The film is an emotional one – two matches are lit above a map of the Middle East and dropped on Iraq. The fire spreads throughout the Middle East – to Syria, Iran, and Jordan – as the paper slowly blackens and curls up.