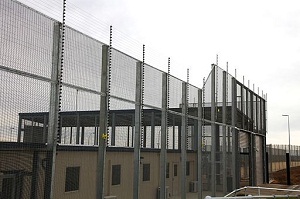 Today, I’d like to write about immigration detention, an issue that is close to my heart. LIRS and regular readers of this blog know that on any given day in the United States, the federal government holds approximately 34,000 migrants and refugees in more than 250 facilities sanctioned to detain individuals for civil violations of immigration law.

However, the Transactional Records Clearinghouse (TRAC), a nonpartisan research center at Syracuse University, has recently released a study, that gives us a new understanding of who is among those 34,000 detained on any given day.  Detainees who ultimately win their cases and the right to stay in the United States have the longest average time held in detention. This includes some of the most vulnerable populations within detention facilities—such as refugees, asylum seekers, survivors of torture, and victims of human trafficking and other crimes, who are held as they wait for final decisions on their immigration cases. The punitive environment in the facilities, social isolation, uncertainties of the process and the ever-present possibility of deportation can lead to deep trauma. For detainees who have already suffered in their home countries, this can be particularly acute if not re-traumatizing.

One flaw of the current detention system is that those with the strongest cases to remain in the United States remain behind bars for the longest periods.  TRAC discovered that people who contested deportation and were eventually released from custody after being found legally eligible to remain in this country had the longest average detention time of 131 days—or more than 4 months. The study further reveals that 20 percent of those who ultimately won their cases were detained longer than 6 months. This is in contrast with individuals who were ultimately deported whose average detention period was just 27 days. These lengthy periods of detention lead to trauma and prevent newcomers from beginning the process of integration into the United States.

LIRS believes that men and women – particularly those with vulnerabilities – should not be held in immigration detention except as a last resort, and based on individual assessments.  LIRS draws upon the work of the Access to Justice Unit to advocate for a more just immigration system that treats individuals with respect and promotes the development of community-based alternatives to detention.

One example of a more compassionate and fair system, the Community Support Network, was launched in 2012 by LIRS and Presbyterian Disaster Assistance. This initiative connects volunteers and non-profit service agencies to offer care and support for migrants and refugees newly released from detention.  Initially, the network provides formerly detained men and women with stabilization services and rehabilitation and together the network works toward the long-term goal of societal integration.  Until this model becomes more widespread, allowing more individuals to be released from detention, LIRS continues to support and promote the work of immigration detention visitation ministry.

To learn more about the immigration detention system and the programs that LIRS supports, including the Community Support Partners and Visitation Ministry, check out the Alternatives to Detention page on the LIRS website.