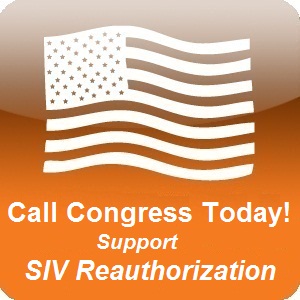 I’m writing today because thousands of people who placed their lives in danger to serve the United States Government and Armed Forces need your voice.

Unfortunately, unless Congress reauthorizes these programs, the Iraqi SIV program will expire this September and the Afghan SIV program is set to expire in September 2014. If these programs expire, more than 75% of the visas will go unused due to bureaucratic delay while thousands of applications remain backlogged. This is an unacceptable response to those in the international community who have dedicated themselves to serving our troops.

The good news is that Congress can easily reauthorize these special programs. We need constituent voices to tell Congress that, as Americans and people of faith, we have a duty to honor our commitment to these courageous men and women who have risked their own lives and the lives of their families to serve alongside the U.S. Government and Armed forces.

You can learn more about this issue by watching this video on SIV reauthorization, or by reading the important letter on SIV sent by faith leaders to Members of Congress.

Please call your two senators and your representative in support of reauthorizing the SIV programs. You can reach all three at (202) 224-3121. You may wish to use the following message:

I am calling to express support for the extension of the Iraqi Special Immigrant Visa program, which is due to expire at the end of this month, and for a similar extension for the Afghan SIV in 2014.

The brave Iraqi and Afghan men and women who support our troops on the ground are essential to safe and successful completion of U.S. Missions, and deserve our protection for risking their lives in service to the USA.

If these visa programs are allowed to expire, they will not have been successful in fulfilling their congressional mandate as less than 75% of the available visas have been used while thousands of applications are backlogged.

Please support the extension of the Iraqi and Afghan SIV programs as part of the FY 14 continuing resolution bill or other upcoming legislation.