Washington, D.C. Event Lifts Up the Voices of Migrants and Refugees 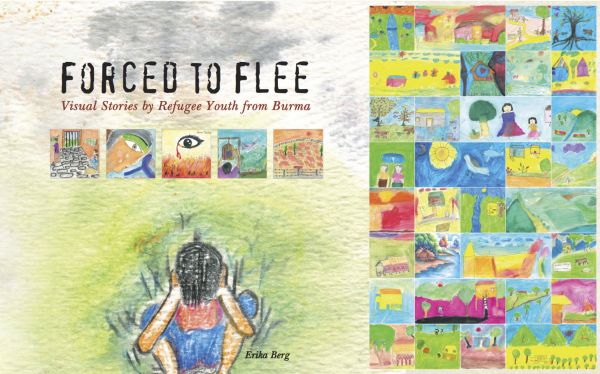 “Helping brothers and sisters from around the world who have been persecuted start their lives anew is challenging work; but, as a community we must face these obstacles head on because they are nothing in comparison to what refugees have endured and what they confront as they seek to understand and adopt a new culture,” shares Melissa Graves.

LIRS partnered with Lutheran Social Services/National Capital Area (LSS/NCA) to host an event to raise the voices of migrants and refugees on April 15, 2015, at the Lutheran Church of the Reformation in Washington, D.C. At the event, Erika Berg launched her new book, Forced to Flee: Visual Stories by Refugee Youth from Burma. She was joined on a panel by two former refugees, Joseph Lewis and Van Bawi Thang, LIRS board member and CEO of LSS/NCA, Melissa Graves, and moderator Summer Parrish of LSS/NCA.

Forced to Flee features narrative art by refugees from Burma refugee youth who had been forced to flee violent conflict and persecution in their native land. Erika traveled with her husband and young daughter to refugee camps and urban slums along the borders of Burma conducting visual storytelling workshops for refugee youth. She provided each participant with watercolor crayons and asked them to illustrate a question including “Why were you forced to flee Burma?” or “What is your dream for the future?” Melissa Graves reflects on Erika’s work, “Erika’s book is beautifully assembled–the artwork she selected and the stories she chose are powerful examples of the refugee experience. Her passion for helping refugees is contagious.”

Joseph Lewis, a former refugee and LIRS Refugee Academy graduate, took participants on his courageous journey fleeing violence and persecution in his native county, Liberia. He journeyed for three weeks on foot to a third country before securing refugee status in the States. Shortly after arriving in the United States however, Joseph turned 18 years old and had to provide for himself. Lacking the requisite skills or means to do so, he became homeless on the streets of Washington, D.C. for two years, until a Lutheran church member offered him a helping hand and hope. Church members supported Joseph as he completed his education and built a new life. After years of hard work, Joseph is now Washington, D.C. Metropolitan Transit Police Department employee. He mentors inner city youth, tells his motivational story at local schools, and is planning for his graduate studies.

Van Bawi Thang, a former refugee from Burma, shared his story next. Van is a self-motivated and passionate individual who came to the States with minimal English skills or networks, but persevered in teaching himself English and American culture, starting by studying the Yellow Pages in the phone book. Van is now considered “Papa” among recent refugees from Burma in his community. They look to him for support in daily life including transportation and translation at doctor’s appointments. Van further assists refugees through his work with LSS/NCA as a job developer.

Adding a voice from an organization assisting refugees and migrants in resettlement, Melissa Graves shares her reflections on the event:

I am always encouraged by the resilience, hope, and resourcefulness of refugees who come to our communities to rebuild their lives, but hearing Joseph and Van share their personal stories was an inspiring reminder of why the work we do each day is critical. Helping brothers and sisters from around the world who have been persecuted start their lives anew is challenging work; but, as a community we must face these obstacles head on because they are nothing in comparison to what refugees have endured and what they confront as they seek to understand and adopt a new culture.

Preview Forced to Flee: Visual Stories by Refugee Youth from Burma or order a copy of the book online, please visit: http://burmavisionsforpeace.org/