Congress Continues to Talk About Immigration; We Need Action — Stand for Welcome 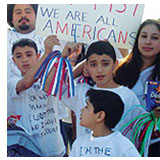 Second, we were reminded of the importance of speaking through our faith when Damon Thibodeaux, a man wrongfully accused, placed on Death Row and held in solitary confinement for almost 15 years before being acquitted, spoke before the Senate Judiciary Committee. He told Committee members that his faith teaches that we should be humane in caring for all people. Unfortunately, solitary confinement is also used in immigration detention, sometimes with devastating consequences for survivors of persecution and torture. Although there have been steps taken to improve oversight of solitary confinement in immigration detention, we continue to fight for humane alternatives to detention for vulnerable newcomers.

Third, we lift up the sentiment expressed by Representative Sheila Jackson Lee (D-TX) during a hearing in front of the House Judiciary Committee. Rep. Lee spoke of being inspired by the collaborative nature of discussion of immigration reform after Republican leaders in the House of Representatives released their Standards for Immigration Reform. LIRS stands alongside migrants and refugees by calling for immigration reform that includes our five core principles and will continue to work towards a fair and just solution.

Please join us in contacting your representative either through the LIRS Action Center or by calling the Capitol Switchboard at (202) 224-3121 to let him or her know that people of faith stand for fair and compassionate reform that welcomes the newcomer and unites families. Simply talking about reform is not enough – our families, congregations, and communities need meaningful action.