What Being Undocumented Taught Me About Citizenship | LIRS
URGENT: Immigrant children and families affected by Hurricane Ian need your support! Donate now.
Skip to content

What Being Undocumented Taught Me About Citizenship 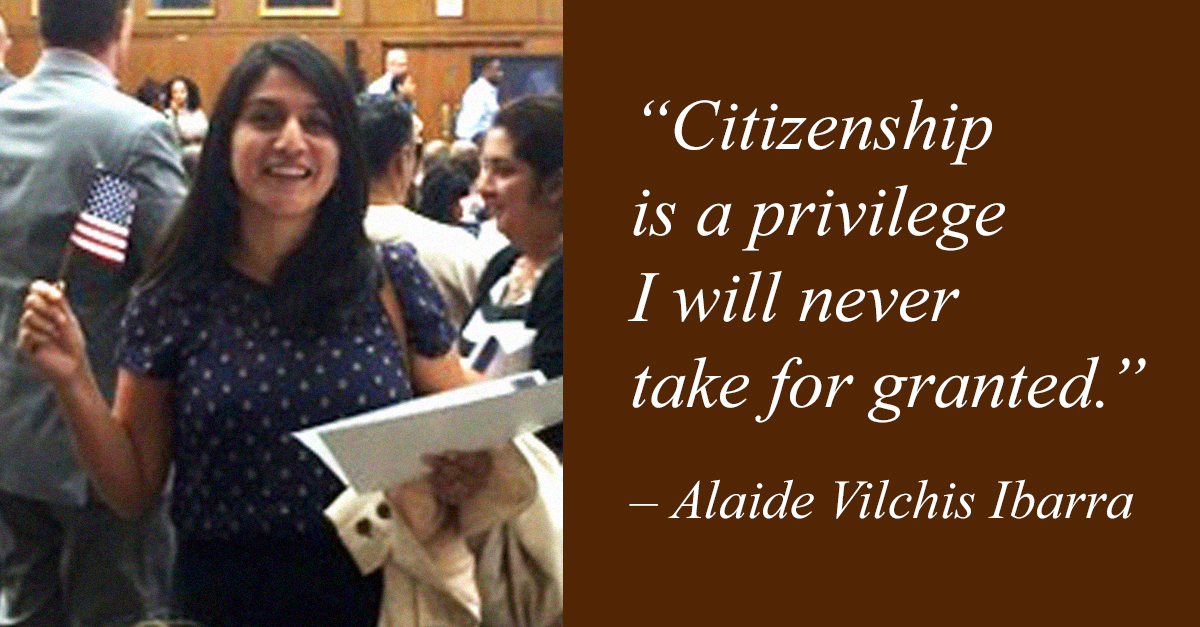 In honor of the courageous journey of millions of DACA recipients, I’d like to share a guest post by Alaide Vilchis Ibarra, Program Director, Migration Policy for the Evangelical Lutheran Church in America. This originally published in 2014 but its message is timely now. Alaide shares her story– from living as an undocumented migrant to being formally recognized as an American citizen.

Recently, I took my Oath of Citizenship to the United States. The journey that brought me to that moment in the courtroom, standing alongside 119 other future Americans, had been full of moments of powerlessness and fear. Growing up as an undocumented immigrant, I learned to be nonexistent, in fear that the sacrifices my family and I had made to give me a better life would be taken away. Although the term for young people that, like me, came to the U.S. as children was not yet widely used, I was a “DREAMer.” I was a DREAMer that often felt alone and scared navigating the education system I needed to follow my dreams of becoming a journalist. I cannot put into words how a program like Deferred Action for Childhood Arrivals (DACA) would have changed my story. Not only would I have been able to work and go to school without so many barriers but DACA would have signaled that maybe my community and the government saw that my life and dreams mattered.

The first few weeks after moving to Kansas are probably some of the most painful to remember. My family slept in the living room at an uncle’s house and in a hotel even after I started attending school. I can still see myself sitting at my uncle’s kitchen table translating my homework word by word. The only place that felt safe in my school was the English as a Second Language (ESL) classroom, where I knew I wouldn’t be judged for mispronouncing a word or misunderstanding directions. I sat quietly in all other classes hoping classmates wouldn’t talk to me so I didn’t have to think of the words to respond.

I learned English so quickly that my ESL teacher thought that I might have faked my level of understanding in my initial English evaluation. In my junior year, I started to be a more active member of the community by joining school clubs, playing sports, and getting to know new people. The ESL classroom with my teacher, Mrs. Barney, remained a place where I could feel comfortable, where I could find other teenagers who understood what it was like to leave your life behind.

The first time I told anyone that I was undocumented was my senior year of high school. My parents and I were looking for any possibilities for me to go to college. We met with a caseworker at an organization that helps migrants in Kansas. We told her that I was in the honor roll of my high school, earned numerous academic awards, became the president of a few clubs, and volunteered. We asked for any options for me to continue my education. There weren’t any. Even after receiving a private scholarship from Saint Louis University, my family still couldn’t afford it.

We didn’t know the system and were afraid to tell anyone new about my status. Fear prevented us from reaching out to people who could have supported me. DACA would have changed that. I now know that there were other DREAMers who were speaking out and fighting to have a chance to continue their education. That day, the caseworker told me that she and other advocates were working on passing a bill that might allow me to attend college.

That bill, the Kansas in-state tuition law, went into effect July 1, 2004, a few months after I had graduated high school. I began attending classes at the University of Kansas that August. At the university, I finally felt like I had found a home. The university molded me into a citizen and completely changed my life. I met my husband there, found my political voice, and began understanding my role as a member of a community.

I started the process of becoming a U.S. resident right after my husband and I got married. The moment I received my residency card was the first time I was acknowledged as a member of a community that I had belonged to for 10 years.

Shortly after, I was asked to testify in the Kansas legislature to protect the in-state tuition bill against efforts to repeal it. Standing in front of the legislators telling my story and how the work of advocates, the faith community, neighbors, and other undocumented students had impacted me, sparked my passion for public policy. I had the honor of representing students who, like me, were supposed to be only shadows. Today, I work every day to ensure that other young people – whether in the U.S. or Guatemala – know others are invested in their dreams and future.

The day of my citizenship ceremony, I thought about my ESL teacher and the caseworker, who I am still in regular contact with. I felt grateful and humbled to have so many people advocating for my dreams, even before meeting me. When I felt I had no voice, they spoke out for policies that protected and uplifted me. The most meaningful thing about my U.S. citizenship to me is having the ability to speak out for policies that will protect the dreams of other migrants.

Citizenship is a privilege I will never take for granted. Although change is slow, I know my voice is strong and will not waver. Continue going to LIRS’s Action Center, voting, and contacting your local, state, and federal authorities. Join me in speaking out in support of compassionate immigration policies.