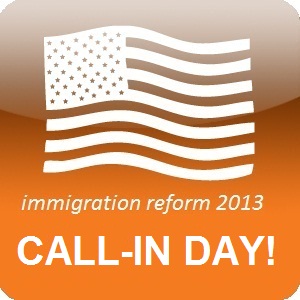 I’m amazed at the extreme lengths some lawmakers are willing to go to in order to derail the progress we’ve made on immigration reform. Their tenacity will make this week of Senate hearings one of the busiest for those of you who are committed to fair and compassionate reform. Thank you for your unwillingness to back down—and your determination to speak out.

Besides threats to provisions for refugees, we’re also seeing certain senators attempt to amend the Senate immigration reform bill, S.744, to expand indefinite detention of migrants, limit the use of alternatives to detention, and make it harder for migrants to obtain access to legal counsel.

Families and children would be among the first to suffer if the Senate Judiciary Committee votes this week to amend S.744, the immigration reform bill, to reflect values that are neither American nor Christian. For example, Senator Chuck Grassley (R-IA)’s amendment 53 would limit the use of alternatives to detention and bond and enable indefinite detention of some migrants. This would tear more families apart and defy both the American belief in due process and our scriptural responsibility to welcome—not imprison—the stranger among us.

Amendments along the lines of Senator Grassley’s would cripple S.744’s ability to deliver what the majority of Americans are calling for: immigration reform that keeps families together, because family unity is vital to our congregations and communities.

As my colleague Megan Bremer, who directs LIRS’s Access to Justice unit, says: “LIRS seeks to ensure that our nation’s immigration laws are humanely and justly enforced. It’s critical that no amendments hinder S.744’s capacity to expand alternatives to immigrant detention, protect programs that keep detained people informed of their rights, increase their access to legal counsel, and limit the use of solitary confinement.”

S.744 (The Border Security, Economic Opportunity, and Immigration Modernization Act) would improve migrants’ access to justice, due process, and freedom of movement. On May 9, the Senate Judiciary Committee began considering amendments and will continue this “mark-up” process through May 24.

LIRS applauds the following positive amendments to S.744 regarding detention and due process:

LIRS calls on the Senate committee to vote down the following amendments, in addition to Grassley 53:

This is going to be a long week for all of us. Thank you for going the extra mile for detained migrants and their families!